Based on SLS 3D printing technology, Red Rock is a desktop 3D printer made by a manufacturer based in Russia. A powerful laser source is used for sintering the material layer by layer for forming the desired geometry.

The best part about this technology is that because the object is made within a bed of powder, there is no need for support structures.

Because of this characteristic, complex geometries and shapes are easily attainable. Moreover, the printer is easy to use because of an intuitive graphical control based on the company’s LM-ROBO software platform. Users can easily control the printer using a web-based interface and also connect it to a cloud print service. 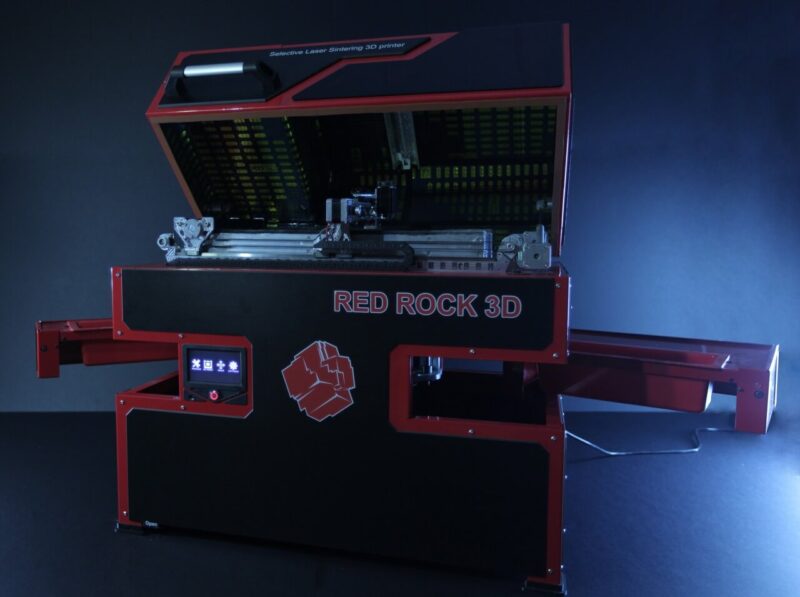 So, where does the Red Rock 3D printer rank in terms of the value: money ratio? Does its functionality suit the money at which it is marketed? Well, let’s find out by going in-depth about the printer.

Red Rock has a positioning accuracy of 5 microns. It is faster than other 3D printers offered in a similar class with a print speed of 15 cubic centimeters per hour.

The printer is packed with more great features that are mentioned and explained below. These features make it applicable in various industries such as designing, technical universities, manufacturing enterprises, private as well as public.

To ease its user’s workout, Red Rock has embedded its printer’s body with a touch screen interface. Normally, in desktop SLS 3D printers it’s difficult to find such a long user interface. But, by availing a five-inch long intuitive interface, the printer manufacturer has offered convenience to easily select a particular option and monitor as well as control it via one touch.

So, apart from normal functions such as starting pausing or stopping the 3D printing process, users can also monitor as well as change normal print settings via the touch screen interface. Moreover, it’s a great way to decrease human intervention and increase the overall efficiency of the printer.

Operators can connect to Red Rock using a micro SD card which is a standard way of exchanging files securely. Remember that the first and the foremost step in the 3D printing process is slicing a 3D printed design file that has been modeled on a particular software.

This process is important because it makes the file readable to the printer. After conversion, the sliced file needs to be fed to the printer for which users need to connect. That’s exactly where the micro SD card slot plays a huge role. It allows users for standalone 3D printing.

Because of this feature, there is no chance of any sort of breach in the printer or the design file, which is very important to ensure as the 3D sliced file is the primary source on which the object’s geometry will depend.

By putting in place a heated print chamber Red Rock has allowed its users to print with materials that have higher sintering and fusing temperatures. So, users of the printer have more scope of printing objects that can be put into use for making parts and functional prototypes that find application in various areas.

Depending on the part geometry and the type of material that is to be processed, the printer can stretch anywhere from 15 to 20 cubic centimeters per hour. This print speed is an anomaly considering that the Red Rock 3D printer is based on SLS 3D printing technology.

If you are looking for an SLS 3D printer in the same price range at which Red Rock is available you’d hardly manage to come across a machine offering such a high print speed.

Red Rock 3D printer’s sintering work is completely taken care of by a laser source that has a power of 5 Watts. It is able to create objects with a layer thickness as low as 0.1 mm. Precise laser sintering of powdered materials that are rarely available in the market, such as PA 12 is possible using the printer.

The machine is equipped with components that are manufactured using high precision CNC technique. This contributes to the machine’s accuracy which it manages to produce while manufacturing parts with complex geometries and materials.

When you have components that are precise, the overall accuracy to perform a particular function as a machine is always increased than the machine which does not have such a feature. So, thanks to the manufacturer for putting in place high precision CNC machines for increasing the overall efficiency of the Red Rock 3D printer. 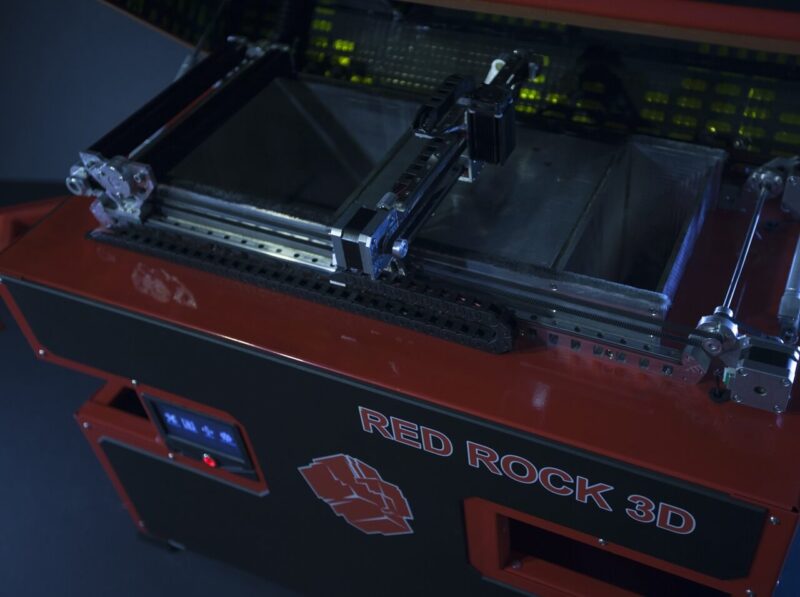 Red Rock 3D printer is based on a powder bed fusion set of 3D printing technologies named Selective Laser Sintering. It offers a maximum build volume of 180 mm * 180 mm * 180 mm which allows users to build parts and functional prototypes in one go. All these objects have a minimum layer thickness of 0.1 mm.

The printing material used by the printer is in minute powder form. It is processed in a heated chamber, heated feed-bed, and heated print bed. The machine features high-precision CNC machine parts that perform accurate mechanisms. A laser diode of high power in the range of five Watts takes care of the sintering of parts.

A 5-inch long touch screen interface allows users to control as well as monitor various functions on the printer like pause, play, and stop the printing process as well as change some print settings.

The machine offers an efficiency of 20 cubic centimeters per hour depending on the model as well as material. Red Rock 3D printer allows printing with PA12 black material which is a rare one to print. It comes with a warranty of 12 months.

To know the price at which the Red Rock 3D printer is available you’d have to ask for a quote from the manufacturer.

Red Rock 3D printer is delivered taking into consideration all the safety precautions. The printer has an appearance like that of a treasure box. It stands on four stands and has a unique body. It is delivered as a completely assembled one. There is a touch screen interface right in the front of the printer besides the company’s logo.

The complete construction of the machine consists of a powder bin, a build platform, a powder recoater, a laser, a set of galvanometers, a set of heaters as well as a powder feeder.

The machine is a plug-and-play type 3D printer, so once it’s delivered all you need to do is find an appropriate place for the printer and give it a power supply to start its operation. So, the machine does not typically take much time for setting up.

Generally, an SLS 3D printing process begins by filling the powder bin with a certain amount of polymer powder with which you wish to print a part or functional prototype. The bin is then placed into the 3D printer for starting the heating process, but just before that the heaters are used for getting the powder to a temperature just below its melting point.

After that is achieved, the actual 3D printing process starts with the re-coater depositing a single layer of powder onto the build platform. This is the time when the CO2 laser selectively induces fusion between particles for forming a solid part at specific locations. Also, note how galvanometers are utilized for navigating the laser beam to a specific point on the build platform. 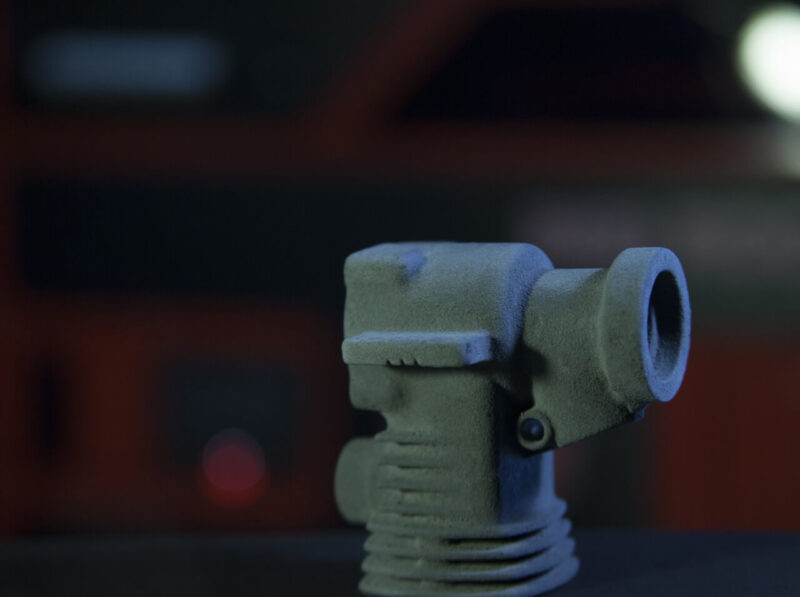 Red Rock 3D printer delivers excellent surface finishes and manages to serve a print quality that is very rare to expect from FDM or SLA 3D printers or even intermediate or industrial level. But all the credit goes to the high-power laser source and the inherent nature of SLS 3D printing technology that enables users to print parts and functional prototypes of high-level intricacy with ease.

The printer is compatible with software named LM-Robo – it has intuitive graphic control and is easy to use. The application can be controlled via the web and operators can connect to a cloud print service.

Red Rock’s technical team can be reached out via email as well as on-call for any sort of troubleshooting ideas. They are ready to provide any sort of assistance you need with understanding or solving any component-related troubles.

The principal factors that are good to know before making buying decision regarding the printer are mentioned below in brief.

3D Printer Cost: SLS 3D printers are known to be a bit on the higher end compared to FDM and SLA 3D printers. They do not offer as high build volumes as FDM or SLA 3D printers but are renowned for high-quality parts.

3D Print Speed: Normally, SLS 3D printers are not much known for high print speeds, but the built rate of the Red Rock 3D printer is extraordinary.

3D Print Quality: The layer resolution offered by Red Rock is very minute which makes up for an excellent surface finish. The machine is capable of printing even intricate geometries with a dimensional level of accuracy.

3D Printer Practicality: The heated chamber, feed, and build plate come out to be a huge plus for all the users in the 3D printing process. Red Rock’s touch screen interface eases the interaction process, and its micro SD card slots help in transferring files at one go.

3D Printer User Expectations: For professional users, Red Rock proves to be an extremely helpful tool for manufacturing parts with excellent build quality and strength. Although the build volume is a little less compared to FDM and SLA 3D printers, it’s much high than other desktop SLS 3D printers available in the same price range!

Overall, the Red Rock 3D printer is a high-end desktop SLS 3D printer capable of processing the rarely processed PA12 black material with its multi-zone heating process and high precision CNC machined parts. For sintering the parts, it uses a 5 Watts laser diode and helps users achieve an efficiency that is unmatched.

Although the machine might look complex to first-time users of 3D printing technology, it would prove to be a great learning experience for machines that are capable of manufacturing highly complex parts with ease.