Tronxy X5S is a successful 3D Printer, and the main reason for its success was and still is believed to be the build volume it offers for a price below $300.

This 3D printer is an updated version of Tronxy X5. When it first arrived in the market in early 2018, in minimal time it became one of the best-selling 3D printers in online stores.

In terms of popularity, Tronxy X5S had overtaken X5 and even X3S. And the main reason for its success was and still is believed to be the build volume it offers.

Its affordability has managed to make a sweet spot in the hearts of its consumers.

Having stated so, there are other reasons as well for the printer’s success.

And to explore all those features specifications, first impressions, print quality, and a lot more. You’d have to keep reading the article till its end.

Starting with the features of Tronxy X5S, the Aluminum frame is the first one that you’ll notice.

The stability of this frame does not let the printer vibrate even while printing a part or functional prototype with maximum or near to maximum print volume.

The fact that’s worth comparing is the build volume and the price of this printer with the Zortrax M300.

Although the print volume of Zortrax M300 is smaller than Tronxy X5S, it’s sold in the market at ten times costlier than this printer.

This printer has a Core XY cube configuration and the CoreXY design makes sure that the stepper motors from both these axes do not cause any vibrations while printing by moving unnecessarily.

And it is because of this reason that all the parts and functional prototypes printed using this printer is dimensionally accurate.

Apart from the rigidity, there is smooth sliding which is too be appreciated. The printer manufacturer has a linear moving system.

And the V-slot wheels on the gantry are the reason behind the added stability of the printer.

For monitoring and operating this printer more digitally, the manufacturers have made sure they have got in the hot favorite in the industry at the moment.

With the touch screen display, it is possible to pause, and start the print again.

It is also possible to indulge in parts without physically touching them.

Overall this feature works to deliver a lot more than a single button that is required to pause and play the printer.

The lesser the human intervention the better the quality of the print is a lesson that we all know now.

To decrease the human intervention this is the step taken by the printer manufacturer.

This will let you, by clicking, level the print bed in the way you wish to.

This is great when there is an involvement of intricate printing, be it parts or functional prototypes.

Along with the touch screen display, this is a new hot favorite and it’s great that the company could accommodate all the features at the price at which this printer is offered.

Using this feature you can get a notification on your touch screen display about the amount of filament that is remaining on the printer’s filament spool.

So what happens is, there are fewer chances of you starting a 3D printing process without making sure that you do not run out of the filament in the midst of it.

If this feature is absent, you have more chances when you are continuously printing and your mind is involved lesser in any other aspects that 3D printing a part of a functional prototype, loading, and unloading is something that is forgotten.

Along with that, you will also be served with information on various aspects of the printer such as the print bed size, the power supply, and a lot more. 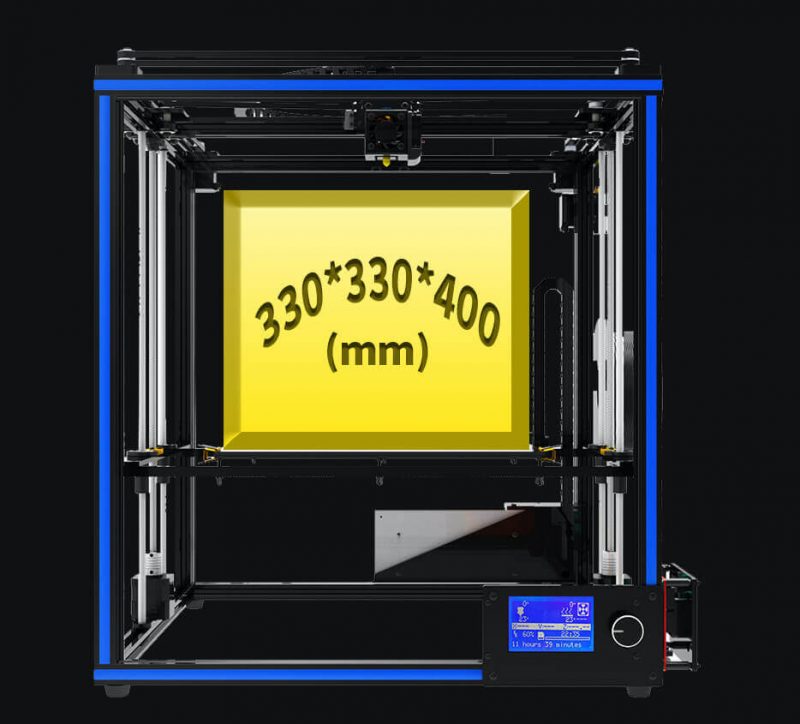 This printer has a frame that’s made up of Aluminum, and it supports an LCD display.

The power supply needed to operate this printer is 110/220V 30 Ampere.

The printer supports SD card and USB cords. It prints parts and functional prototypes in the layer thickness range of 0.1 to 0.4 mm.

The filament diameter used in this printer is 1.75 mm. The printing Speed range offered by the printer is 20 to 150 millimeters per second.

Working conditions as recommended by the printer manufacturer in terms of temperature is five to forty degrees Celsius, whereas humidity conditions should be anywhere from 20 to 80 percent.

According to the build size that it promises to offer, the price is very affordable. 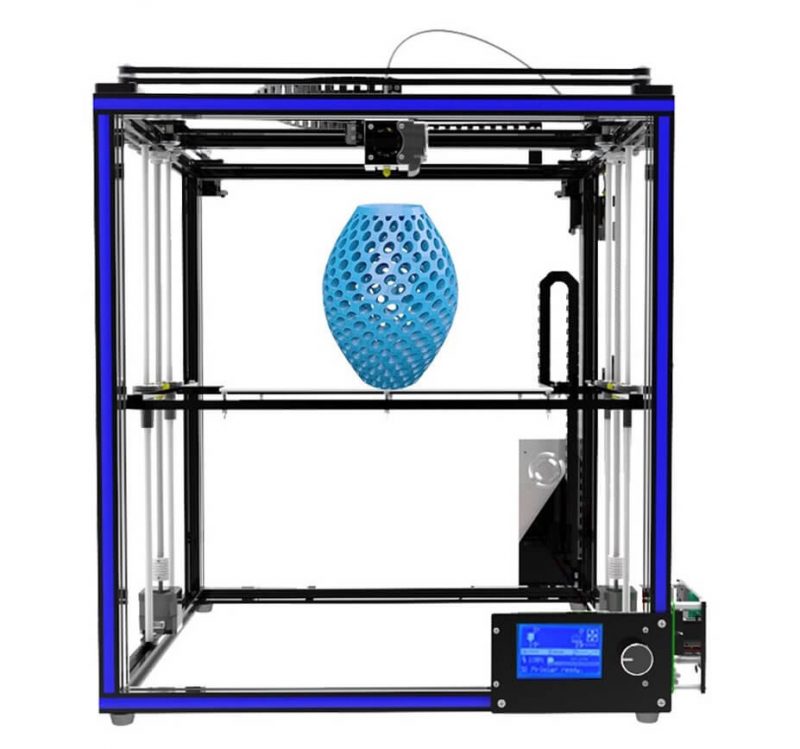 An open square frame with a print bed in the middle supported by the four stands that make the square is the first impression of the printer. To be more specific it looks like a cage.

To help the nozzle reach out to the print bed for printing the first layer, the system is connected with the rails, which also helps it to travel back against gravity.

There is a touch screen display on the right bottom of the printer.

It can be easily accommodated on your desk like your desktop computer.

The Tronxy X5S comes as a 3D printer kit, meaning that you will have to assemble it yourself.

The assembling time as reported from trusted sources should take anywhere between 4 and 5 hours, depending on your expertise with building 3D printers.

Also to mention, some parts of this printer come pre-assembled.

TronyX5S is shipped as a DIY kit, wherein missing screws and nuts are standard excuse given by many companies.

Although the omission of significant components is a rarer occurrence, it’s been known to happen.

Having stated that the printer is shipped with the following components apart from the printer:

Some websites report the lack of assembly instructions which also lead to the cause of a substantial amount of frustration for the unversed hobbyist or first time builder.

The language on the assembly instructions seems to have been translated and which is not how you expect it to be done.

In short, you will have to work hard to set up this printer. It is not a plug and play type printer.

But, the upside of this fact is, if you can assemble it, you can then term yourself an expert who can play with each printer part, no matter if it is a small or big one.

The printer is based on FDM 3D printing technology wherein deposition happens layer by layer after melting the filament on the print bed, layer by layer, which is present in the extruder while the start of the printing process.

The complete printing cost of the printer can be claimed to be lower than the processes that use lasers for 3D printing a part or functional prototype.

Although it depends on the quality of the part that you are building and the level of infill required in it. 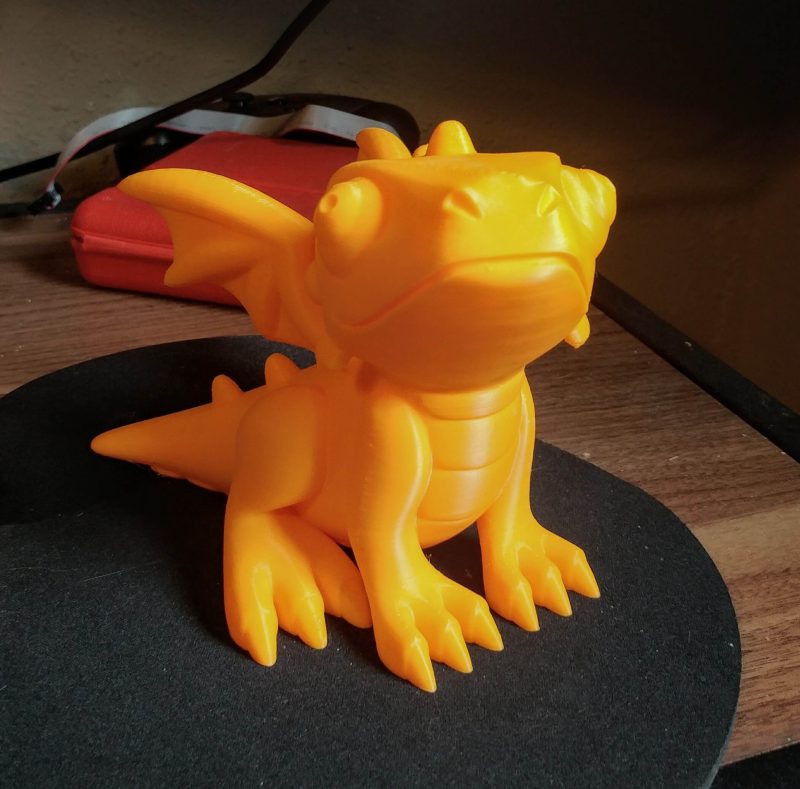 Overall, the reported print quality for this model of printer isn’t bad for a model in this price bracket.

In some amount, the issues of ghosting, layering, stringing, nozzle oozing, and ringing are there, but they are nothing unusual.

They are far less widespread than anticipated, especially at lower speeds.

Although these inconsistencies will aggravate any perfectionist wanting to print near error-free pieces, but are entirely satisfactory to casual users which the company aims to primarily target.

The biggest issue that is found with the print quality of this printer was due to the TronXY X5S being grossly underpowered and the low quality of the electronics used in the printer which causes trouble with intricate parts and functional prototypes.

When the printer is coupled with the 300mm MK3 heat bed, the standard supplied 12V 360 watt power supply channels are not able to bring sufficient power to the printer, which makes the printers reach above 60 degrees near impossible without adding the insulation while attaining a usually reasonable 50 degrees.

But this takes up the print time by at least 45 minutes to an hour. The lack of power in the printer means that the claims that the TronXY X5S can print using ABS, HIPS, nylon, wood, and PVC filament, cannot be seriously judged.

Only PLA turns out to be truly feasible due to the heat limitations that are also highlighted above. 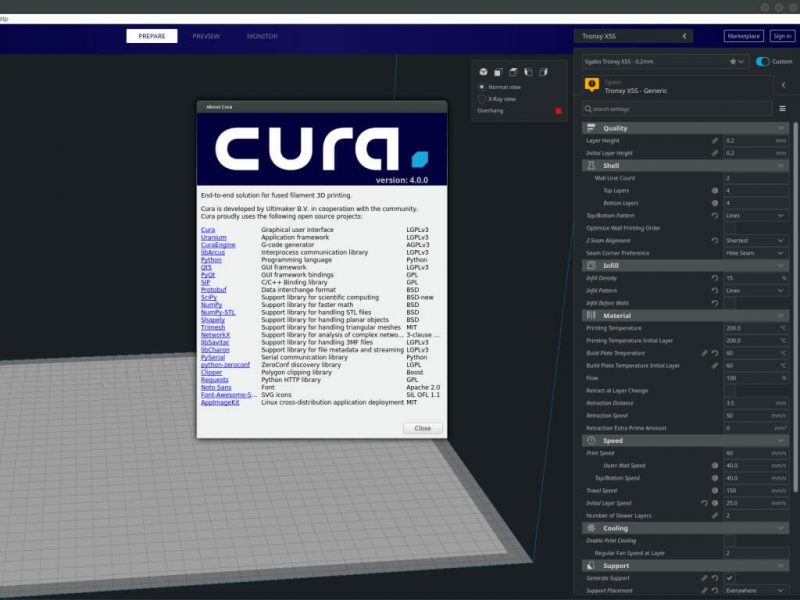 There are two software recommendations given by the printer manufacturer, they are Repetier-Host and Cura, for the slicing of 3D models.

The print file format that the printer understands is STL and the language is G-code.

This software is compatible with Windows XP as well as seven, as well as with Macbook.

The company does not claim to offer world-class customer support.

But one thing is for sure, your doubts and queries will be satisfactorily answered.

Some factors that should be taken into account while purchasing this printer are mentioned in brief, below.

3D Print speed: Faster than the printers available in the same price range.

3D Printer capability: The printer claims to print with more than one 3D printing materials.

3D Printer Practicality: It is a feasible option for those who wish to experiment with the printer and learn more about the technique.

3D Printer User expectations: Newbies in the field are going to find this printer very lucrative and standing up to their expectations.

Although the TronyXY X5S has a solid foundation for a custom modified printer it looks like a project taken accomplished by a seasoned builder yet to grow in the market.

When compared with JGAurora A5 and Creality3D CR-10, you get to know how the printer fails as a standalone device in getting too many crucial elements right. Especially while rivaling the above-mentioned, similarly priced 3D printers that are perfect beginner introductions to the world of 3D printers.

It should also be noticed how when the printer is once upgraded and tinkered with, the TronyXY X5S comes into its element of outperforming printers priced much higher.

With this, the TronyXY X5S finds its value and its own little niche in the 3D printer market.