What makes Zortrax Inkspire a perfect tool for engineers is the speed and precision of the printer. Research and Development departments and production lines in the industry from automotive to consumer electronics are all in awe while working with this printer.

Being a desktop 3D printer, Zortrax Inspire uses a UV LCD technology for manufacturing parts and functional prototypes from a vat of resin which is ...
Add to wishlistAdded to wishlistRemoved from wishlist 0
Add to compare
Check Price
Zortrax

After establishing itself as a well-known manufacturer of desktop 3D printers, Zortrax’s next creation was a 3D printer based on vat polymerization known as Zortrax Inkspire.

The desktop 3D printers that Zortrax made before this were based on FDM 3D printing technology, so this was the first time Zortrax ever made a printer based on a technology different than FDM 3D printing. The claims made by the manufacturer are very high.

Inkspire, as per Zortrax can produce nine times more precisely than other SLA systems and eight times the speed of them. 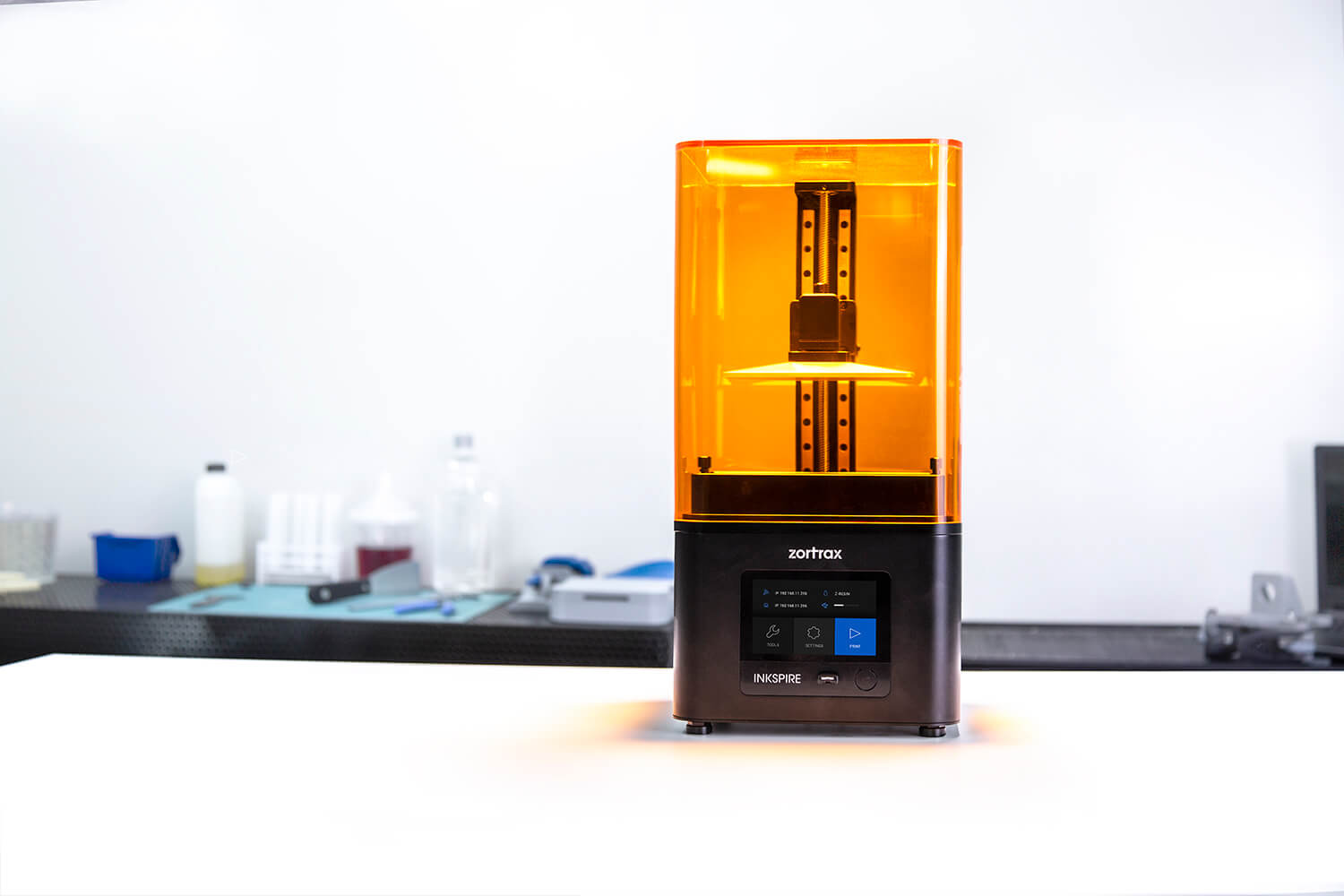 It is said that Zortrax had employed the industry’s complete research team which has worked on creating this printer for two or more months for finding the best design to implement on this printer.

And in this review, we will bring in front of you some of the features that set apart this printer from every other and help you decide whether the printer is worth buying or not.

What makes Zortrax Inkspire a perfect tool for engineers is the speed and precision of the printer. Research and Development departments and production lines in the industry from automotive to consumer electronics are all in awe while working with this printer.

With the specialized resin that the printer comes with, designers can also design jewelry parts as well as dental prosthetics. However, there are many more possible applications that haven’t been yet seen.

A Zortrax Inkspire can print smaller models in very less amount of time compared to the FDM or regular SLA printers. Let’s take a look at the list of features one after the other.

SLA and DLP are traditional resin 3D printing technologies. An SLA printer works at constant precision but the more of its workspace is used, the more it slows down.

In DLP machines, the speed is constant but precision decreases when workspace usage grows. Zortrax UV LCD maintains both high speed and precision at all times.

An advanced optical system guarantees almost perfectly even distribution of UV light across the build platform. That’s why the Inkspire is one of the fastest resin 3D printers on the market without compromising any of the print’s quality.

Supports that are used for assisting the parts and functional prototypes can get additional UV light exposure to make them harder and easier to remove.

Although this may sound like a less valuable feature to those who have not experienced 3D printing technology to date. But, regular users of this technique, know fully what headache removing support is, after printing is completed.

The overall print cannot be decreased without decreasing the time taken for this step and the fact that manufacturers have taken into account this point shows how reliable they are.

The high speed of printing is maintained regardless of the workspace area that you plan to utilize for keeping this printer. The fact to see here is that the printer does not lose its speed even after the printing of 4-5 parts and functional prototypes continuously.

All the available resins can be solidified with the printer’s light source. The wavelength of the resins should be within nanometre.

When you would inquire in the market about printer’s in this range, you’d come across many printers that would not have this facility. Having this feature especially makes work easy for small businesses which have to adhere to the demands of their customer.

And the fact that resins are something that people are habituated with so it’s very hard to convince them to use different material instead. Makers of Inkspire have taken into consideration this fact.

The XY resolution of the printer is 50×50 microns whereas, the minimum layer height of only 25 microns.

Zortrax Inkspire is known to print parts and functional prototypes with immense precision that does not let layers visible to you after the print of the product is completed and cooling has taken place.

Because of this feature, the parts printed in the printer are used in aerospace, jewelry, medical, and automotive. 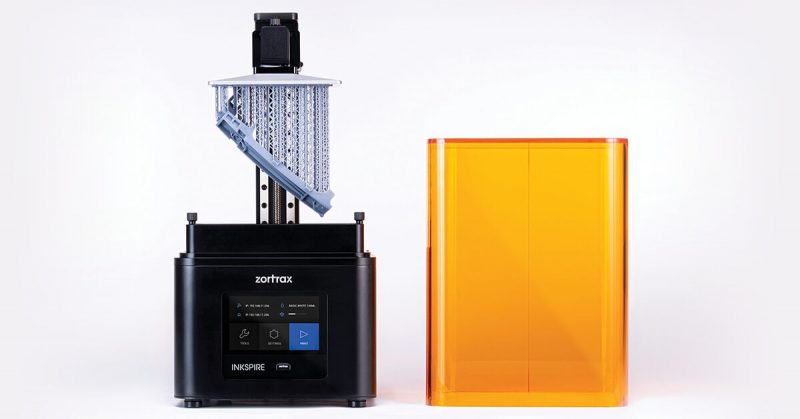 Zortrax Inkspire works on UV LCD based SLA technology. The printer has a pixel size of microns and offers layer thickness in the range of 25, 50, and 100 microns.

The printer comes with a four-inch touchscreen which is also the user interface with which its buyer can operate it. With Inkspire you can print using Zortrax photopolymer resin and other resins as well.

The printer costs $2699 which makes it fall into the range of expensive desktop 3D printers. Hobbyists who wish to hold on to their hobby of 3D printing for a long time wouldn’t mind spending on this printer.

And the fact that the printer’s print quality is excellent would drive small business owners and professionals best suit it.

On arrival, the Zortrax Inkspire is packaged with a starter kit containing pliers, spatulas, a knife, security equipment, funnel, and other tools – a thoughtful addition for the first time buyer.

The machine itself when unboxed measures as the dimension written in the specifications section. Inkspire is constructed of a strong, full metal chassis which brings reliability to its users that it would stay stable even while the printing process is on.

The workspace you get for a machine of this site is about just the industry standard which is for other UV 3D printers.

On further notice, you would get to know how the resin tank inside the system is composed of two main parts. The first one is the metallic part of the tank walls. The second part is the FEP film for its protection.

These parts are attached to each other by a series of screws which aids in the easy removal of the FEP film whenever it needs replacement. With daily usage, the film would need replacement after the two months of use and that’s completely normal.

Set-up of the 3D printer takes no more than 3 minutes, with the system ready-to-print after a minute of initialization time. The only step that you need to undergo is the auto-calibration of the build platform of this machine.

Keep looking at the touch screen of the printer, since it’s going to guide you during the complete setup process. You can also refer to the Zortrax Support website on setup, the information is comprehensive, helpful, and easy to navigate.

Generally, the printer makes a good impression on delivery, setup, and general use.

The printer allows you to print with third-party resins. It does have a print speed that is eight times faster than other SLA printers. Inkspire is six times more precise than other printers, because of its ability to print parts and geometries with dimensional accuracy.

Overall, the printing cost for printing is average.

Vat polymerization technology that the printer uses is one type of UV LCD method, the main advantage of which is the build speed.

Here in this technique, the whole print bed can be cured simultaneously, instead of the single point curing, as in SLA.

This characteristic permits a constant XY precision over the complete build platform, unlike DLP processes. A lot of websites report, printing the 3D Benchy benchmarking boat.

The quality of that part is smooth, however, there are some virtually invisible layer lines but yet the overall test quality was impressive.

On printing the standard Eiffel tower, the model’s quality is reported to be outstanding. Layer lines on that part can only be observed when examined closely.

Even the fine lattice-like beam structure was printed with complete detailing. Due to the printer’s high accuracy and ability to print fine details, this printer is a choice of many jewelers. The overall report of printing ring prints is also exceptional.

Z-SUITE is the name of Zortrax’s comprehensive slicing and 3D printing software. Optimization of Z-Suite has been done to make Inkspire one of the top resin 3D printers that are compatible with third-party LCD 3D printers.

The software features a number of powerful advanced tools namely:

As with most other SLA 3D slicers, so in Z-SUITE, you have the ability to hollow out, infill, clone, and rotate 3D models. Also, you can automatically generate supports inside the slicer that match the part’s geometry.

Here there is also an option to manually edit them, if necessary. Like with Formlabs’ software PreForm, you can use Z-SUITE with multiple Zortrax as part of a 3D printing farm to print many prints simultaneously.

Z-suite software is the one that users of this printer can slice their files with. Using this software, files of extensions .stl, .obj, .dxf and .3mf can be sliced.

The software supports Mac operating systems up to the Mojave version and Windows seven and above versions. Even external software is supported by this printer.

Every minute detail about the printer is mentioned on the company’s website. So, there is hardly anything you would want to know apart from that.

Customer Service of this company is something that you wouldn’t use much. However, whenever you wish to do so you can do that by filling the contact form on the website.

On clicking on the support center option on the website, you would have access to the user guides as well as the warranty and terms and conditions of the printer.

As with other printers, so with Inkspire, the buying decision depends on some points and this section has laconic answers to them. So let’s have a look.

3D Printer Capability: The printer is capable of printing with third-party resins.

3D Printer User Expectations: Ultraviolet LCD printers satisfy their users more in terms of quality, then speed. However, Inkspire is an exception.

The Zortrax Inkspire proves itself to be a highly accurate printer that works on the vat polymerization system. The printer caters to a variety of different needs in the industry as mentioned in the above section.

The quality of parts made by Inkspire is reported to be virtually faultless. Detailed dental models, intricate prototypes of the automotive industry, and jewelry models are well-suited to production on Zortrax Inkspire.

Realizing this low-medium volume manufacturing should take full advantage of this printer as it is capable of providing excellent quality even in continuous printing within a short span of time.

[year] Vectary (CAD): All You Need To Know to Get Started