3D Printing Raft vs Brim vs Skirt – What’s The Difference

The topic of this article is often the most annoying question for FDM 3D printer owners. So, if you too own one of these 3D printers that require printing with solid filament materials, read the article till the end to find out a satisfactory answer.

Even if you haven’t encountered this question yet, in your journey of FDM 3D printing, it can come up anytime. Why we are this sure?

Because not all the parts or functional prototypes can be made without using at least any one of these three! Therefore, before you come across this confusion be prepared by knowing 3D printing raft vs brim vs skirt.

As you might know, FDM 3D printing is a technique of manufacturing objects using solid filaments. While making complex objects, the construction of which contains intricate geometries and hollow parts, you often need to make use of support structures.

After making the final part, the support structures that went into the building have to be removed and what remains is the object that you’ve imagined.

It is into the manufacturing of such complex parts that you will need the help of a raft, a brim, or a skirt.

All three of them have different definitions, applications, need distinct slicer settings, have their own set of advantages and disadvantages, all of which we plan to take you through during the course of this article.

Apart from getting utilized in the construction of complex parts, rafts, brims, and skirts also have unique roles to play in getting the first layer of any object precise.

And even if you are a beginner in 3D printing, you know how important and difficult it is to get the first layer accurate. For once you have done that, half of the battle is won!

We will look at this comparison in four different aspects.

What Are The Definitions of Raft, Brim, And Skirt? 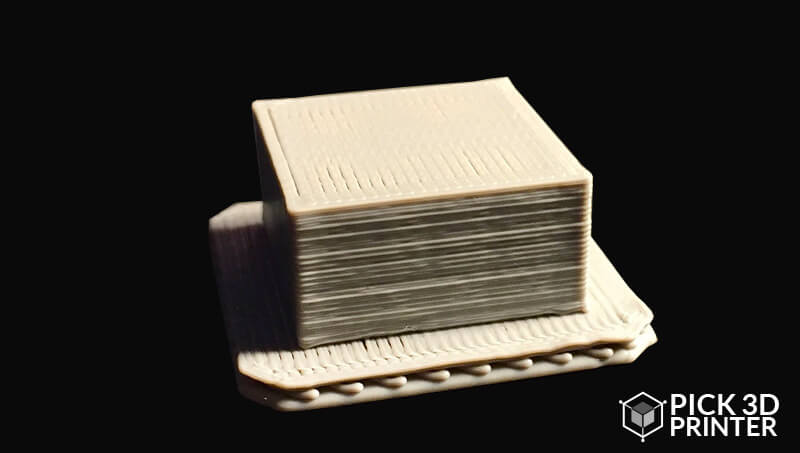 Used in the formation of the first layer, a 3D printing raft forms a horizontal mesh of filament that is deposited directly on the build platform.

The rest of the print will be deposited on this first layer. They are used while printing an object with ABS filament.

Generally, ABS shows high chances of warping. Using a raft decreases the possibilities of warping. Apart from helping to ensure warping does not happen, rafts also help in achieving good bed adhesion. It assists the initial layers of the print to sustain its entirety. 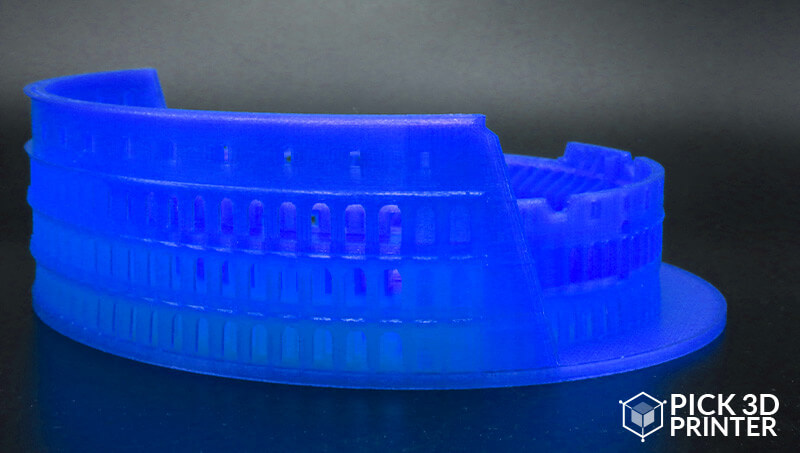 It can be said as that subset of Raft which can only be used with the outer edges of the print and not beneath it. Doubtless, it helps in bed adhesion as well as in the prevention of warping.

Due to its ability to touch the edges of the part you are printing, it can also be considered a skirt. A brim has no contact on the inner side of the printed part.

It assists in stabilizing objects that have very small contact points with the print surface. 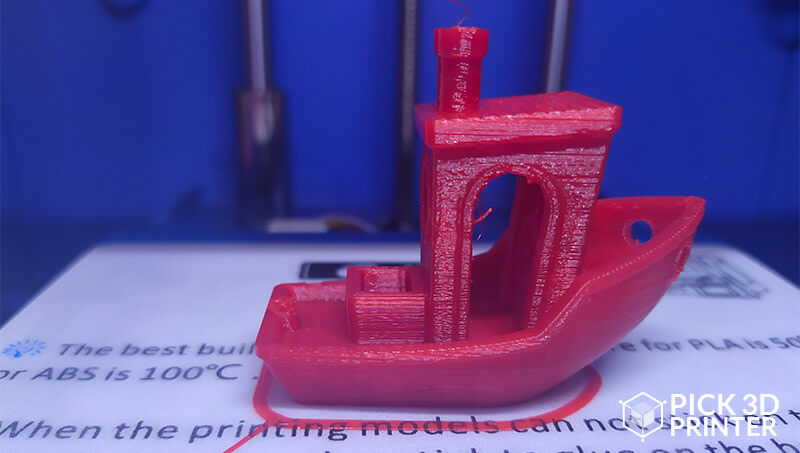 The outline that surrounds a part you are willing to print is defined as Skirt. Neither does it touch a part, nor its surface. But controlling a skirt can be done in similar ways, as controlling a brim or a raft.

Also, a skirt aids in priming the printer’s extruder. It does so by ensuring that the flow from the extruder is smooth before starting the printing process.

So, overall 3D printing raft vs brim vs skirt concerning definition can be understood as the first two i.e. the raft and the brim have direct contact with the part that’s supposed to be printed.

Whereas the skirt does not have any such contact, instead they can give you an estimation of how the equipment is working and flowing.

What Is The Difference Between Raft, Brim, And Skirt Regarding Their Slicer Settings?

Raft needs the highest amount of slicer settings compared to all three. 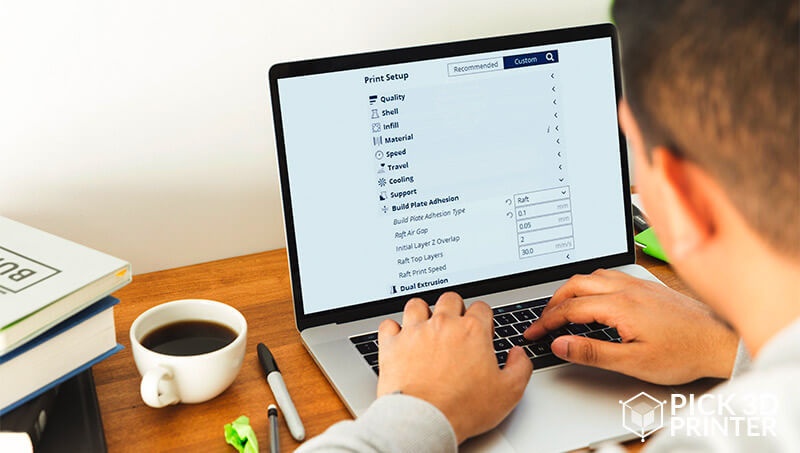 There are four specific terminologies that you need to take into consideration while planning for slicer settings of rafts: 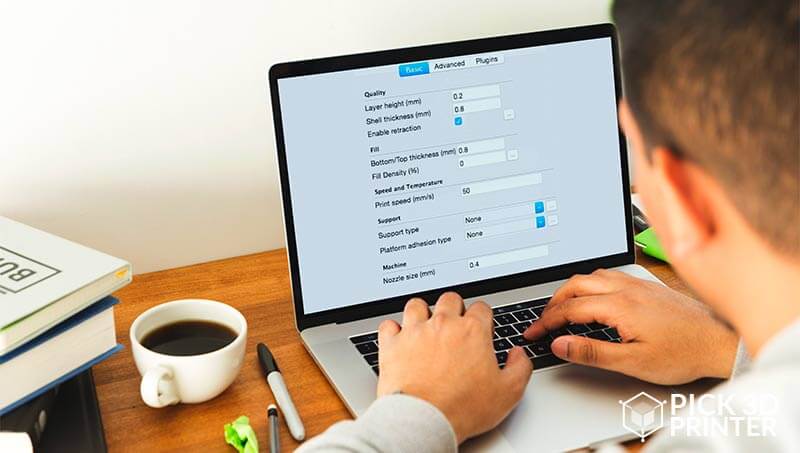 Unlike raft, you need to take into account only one terminology for brims i.e. Brim width, or Line count. The former is referred to as the number of contour lines in the brim. 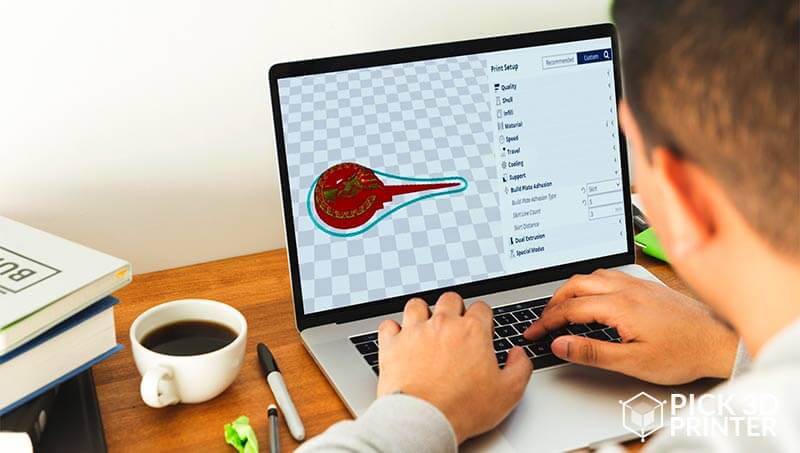 Two important terms for Skirt slicer settings are; skirt line count and skirt distance. The former is defined as the number of lines printed in the outline whereas the latter is defined as the distance between the print and the skirt. Unless the part has a smaller print area, a single line of skirt is enough to have.

In a nutshell, in terms of slicer settings, 3D printing raft vs brim vs skirt can be interpreted as more care to be taken for rafts as opposed to brim and skirt.

What Is The Difference Between Raft, Brim, And Skirt Regarding Their Applications?

After going through the definition and required slicer settings for all the three, it’s to see how they differ in terms of their applications. 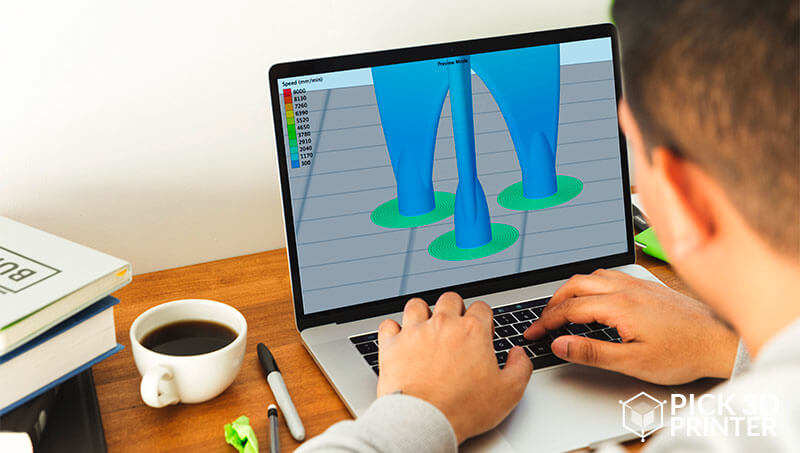 As mentioned above, rafts are must use for decreasing warping in a part. Especially when you are 3D printing using ABS, rafts assist your part to stay away from the issue of warping.

Apart from that, it’s good to use a raft because they provide you a greater bed adhesion. If you have used a raft for printing a specific part, there will be lesser chances of its failure.

Especially in parts that have a tiny bottom on which the complete part is supported, like a rocket or some other thing, rafts play a great role. 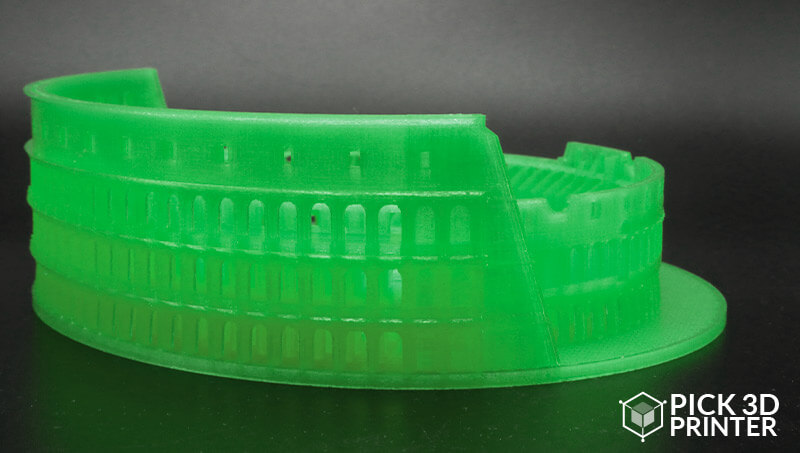 Even a brim can assist in preventing warping and is therefore recommended while printing using ABS filament. Just like rafts, brims also help in improving bed adhesion.

A special note to remember is not to use brims with filaments such as PLA. Supports are often weak and end to break during 3D printing but if supported with brims, they are more effective. 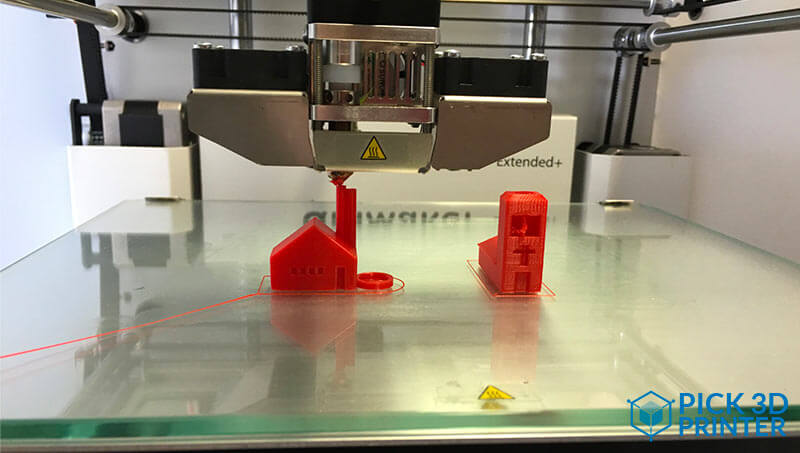 Doesn’t matter which part you are printing or which material you are 3D printing with, a skirt is always advisable.

It serves some extremely helpful functions such as priming extruders and detecting print issues before the start of actual 3D printing. This saves time, effort, and money.

So, concerning their applications 3D printing raft vs brim vs skirt, the last one is more universal than the other two. Not that raft and brim are not helpful at all, but they do have a specific set of areas in which they are helpful.

What Is The Difference Between Raft, Brim, And Skirt Regarding Their Pros & Cons?

Although being useful in their own ways, they have their own set of limitations and advantages.

Pros and Cons of 3D printing a Raft 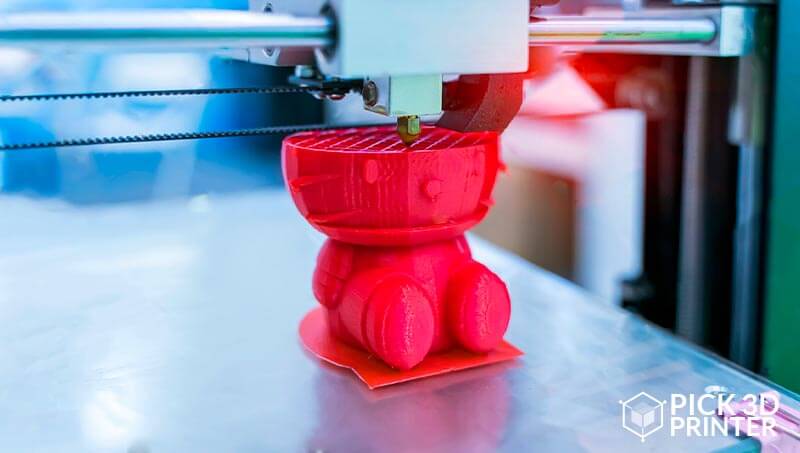 Pros and Cons of 3D printing a Brim 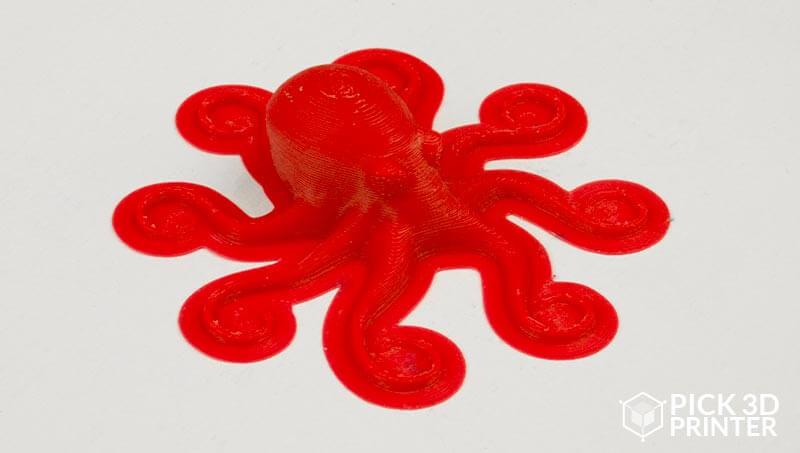 Pros and Cons of 3D printing a Skirt 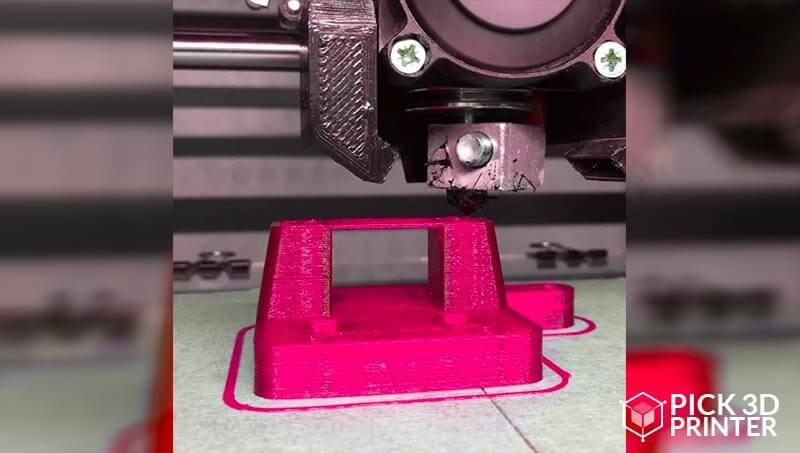 Having stated so, 3D printing raft vs brim vs skirt in the matter of their pros and cons, tend to imply that skirts have the least number of limitations compared to the other two.

But then the skirt does not make any specific value addition to the 3D print as raft and brim do, which is noteworthy. Simple running of skirt which has a width of only a few outlines, at a relatively slow print speed can give you the complete calculation.

In case of the skirt prints neatly, you let the print continue, on the contrary, if it doesn’t you abort the print to make necessary adjustments.

They can also be used as thermal barriers. And one efficient way of printing them is wide over the print bed for insulating it and keeping the temperature higher at the place of printing.

It is very important to understand the difference between each of these amazingly useful structures. They have their own set of technicalities and hence interpreting them correctly will take time.

But once gained, the knowledge will guide you to print the most complex structures possible with an FDM 3D printer with utmost precision.

In fact, it will help you increase the quality of parts and functional prototypes that you are currently printing.

But to print good quality in a FDM 3D printer that’s average requires real skill and knowledge of such specificity.

Rafts, brims and skirts, all have their own roles to play in 3D printing. While the first two make a difference by making contact with the actual part and the support structures needed to 3D print it, skirt does it in a contactless manner.

Very often not having the knowledge of 3D printing raft vs brim vs skirt makes you conclude that FDM 3D printed objects cannot have a good print quality. However, that is not correct.

There is a lot that can be played with while making a part or functional prototype using FDM 3D printing technology. But that requires a minute understanding of concepts like the one mentioned in the article.

It requires good amount of time and patience to study single thing using more than one parameter.  And that’s exactly what we have tried to put up in this article.

Hope this was useful in making you a little more professional in the field of 3D printing than you already were!