The BCN3D Epsilon W27 SC has everything a professional 3D designer would want in terms of a 3D printing ecosystem. Hence high-end users of 3D printing technology are primarily what the company is targetting. Also, small business owners, looking to upgrade themselves for getting more quality can buy it.

The manufacturer of Epsilon W27 SC, BCN3D has always been able to come up with fascinating designs of 3D printers. And this machine is no different. ...
Add to wishlistAdded to wishlistRemoved from wishlist 0
Add to compare
Check Price
BCN3D

In this article, we are going to look at various aspects of Epsilon W27 SC like specifications, print quality, setup, first impressions, and a lot more starting with the printer’s features.

Below mentioned is the list of features with their explanation which enables a user using this printer to stand out in a market that is filled with competition especially in the price range which Epsilon W27 SC falls.

Let’s start the journey of exploring this printer with eccentric features that you might not get to see in other printers.

They would help you while comparing this printer with others and make a decision.

These filaments are developed by none other than companies named BASF and Mitsubishi Chemical. It also permits you to confidently work with third-party filaments of one’s own choice such as PLA, PETG, TPU98A, PVA, ABS, PA, and PP.

With the use of such filaments, there is variability in the types of parts and functional prototypes manufactured from the printer as well as its properties. They are known to have higher build volumes and solid mechanical properties.

Independent Dual Extrusion System: This feature of the printer will expedite the print speed, like no other. An Independent dual extrusion system lets the two extruders of the printer function independently. Allowing users to print on five modes.

The Mirror Mode of this printer enables printing mirrored designs symmetrically and speeds up the iteration time.

Lastly, there is a multi-material mode that allows the user of this printer to print two different materials and combine their properties.

Especially industries such as Engineering, manufacturing, schools, service bureau as well as healthcare, architecture, universities, and research segment will benefit from this feature.

The humidity of materials is kept at an optimal condition and the un-perturbed power supply protects working conditions at all times, so there is negligible risk of losing your work progress.

UPS, Storage, and transportation: The printer manufacturer, BCN3D has facilitated extra two minutes of additional print time even after a blackout.

This allows the printer to return automatically to the home position when the power is back, one is able to resume the print from its last position.

Your workspace is maintained in an organized fashion and a cleanly manner, this would not have been possible without the optimized storage space for materials as well as tools. The cabinet can also be transported from one facility to the other.

Moisture controlled environment and storage facility: For extending the life of materials, the silica gel is kept open to a dehumidifying environment that absorbs moisture from the air in the storage chamber.

As soon as the gel becomes saturated, it is isolated from the materials and gets heated up until the moisture inside is released.

It is this complete process that happens in the storage chamber that keeps the filaments dry as well as the optimal condition of printing.

Any of these can be loaded directly into the humidity-controlled environment, allowing to print while keeping the materials in perfect condition.

HEPA and Carbon filter with Safety Pause: The HEPA filter inside BCN3D Epsilon series 3D printers protects the working environment of the printer from harmful particles whenever you are printing with industrial materials.

Whereas the Carbon filter on BCN3D Epsilon printers shields your environment from any harmful fumes that are produced during the process of 3D printing.

It is keeping this risk in mind that the printer manufacturer has programmed the printer to pause whenever the door of it is opened, even in the middle of the 3D printing process.

The list of materials includes PAHT, CF15, as well as PPGF30. There are also other printer filaments in the developing stage.

Equipped with the latest connectivity features, BCN3D Cloud can easily send your files whenever connected to the network.

This would mean that you’ll have a hassle-free workflow with the BCN3D Cloud platform. All the firmware upgrades would be over the air dealt. So, your printer will always be up to date.

Knowledge Base: BCN3D has kept an online, never-ending, ever-expanding repository of tips and tricks that are sourced directly from the experts for all the users who wish to learn about various parts of the 3D printer and how to operate them. Learning directly from this source would help you boost your printer’s overall performance. 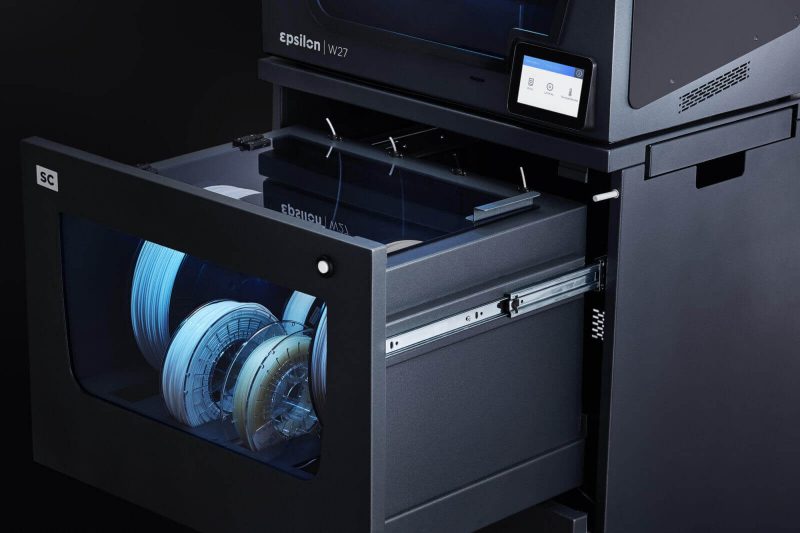 The filament diameter with which parts or functional prototypes can be printed on this printer can be 0.05 mm around 2.85 mm.

The layer height range of all the parts and functional prototypes printed using this printer is 0.05 mm to 0.5 mm depending on the print speed that is used for 3D printing.

There is a five-inch long capacitive touchscreen that displays information in Spanish, English, German, French, Italian, Japanese, Portuguese, as well as Chinese languages.

The operating sound of this printer is 49 decibels. One can connect with the printer using an SD card as well as via Wi-fi, Ethernet.

The build chamber consists of a passively heated chamber that can be paused for safety. 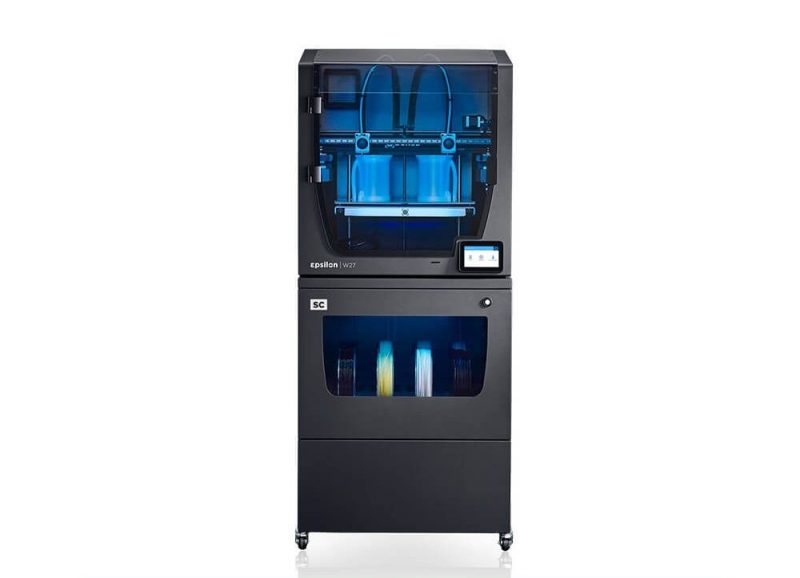 One who sees the printer from its front can get a clear view of the inside of the print chamber.

The nozzle systems, rails, the print bed, everything is visible because of the transparent glass door.

Just where the door ends at the right bottom corner, there is a touch screen interface.

This makes it all for the top part of the printer. The bottom part comprises a storage tank and tool tank. Filament spools are visible because of the 75 percent glass body as well as SC written on it.

BCN3D Epsilon W27 SC comes completely assembled, all one needs to do is locate it at a comfortable 3D printing space dedicated to this printer, plug it and start printing with it.

In case of doubts, there are plenty of databases present on the Knowledge Base of the printer which can be accessed.

As well as the touch screen interface displaying information in many languages is all ready to guide you.

FFF 3D printing technology is what this printer runs on. The parts and functional prototypes are builds using filament spools of different materials that are compatible with the print bed of the printer.

The print cost of Epsilon W27 SC depends on various factors and keeps on changing from one part or functional prototype to the other.

It depends on the amount of infill needed, electricity consumption, the 3D printing filament being used, etc. But generally, the cost of printing a part or functional prototype using FDM 3D printers is lower than 3D printers based on other 3D printing technologies. 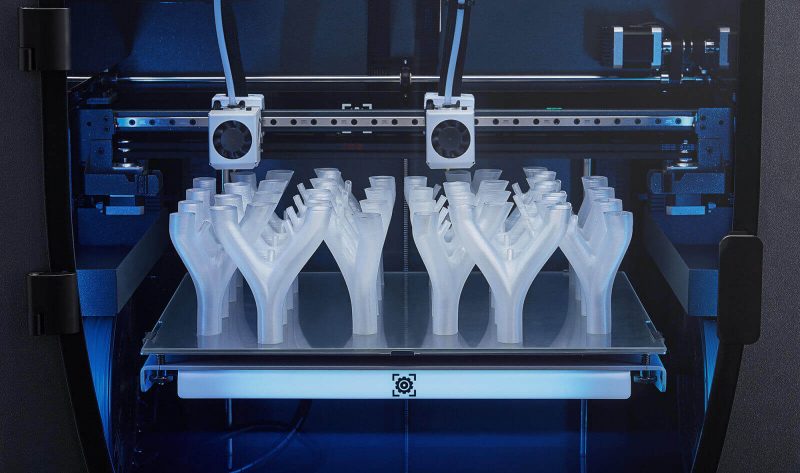 Parts or functional prototypes manufactured by this printer possess the excellent quality of surface finish as well as texture.

Occasionally, they also need post-processing, but mostly they are good to go. 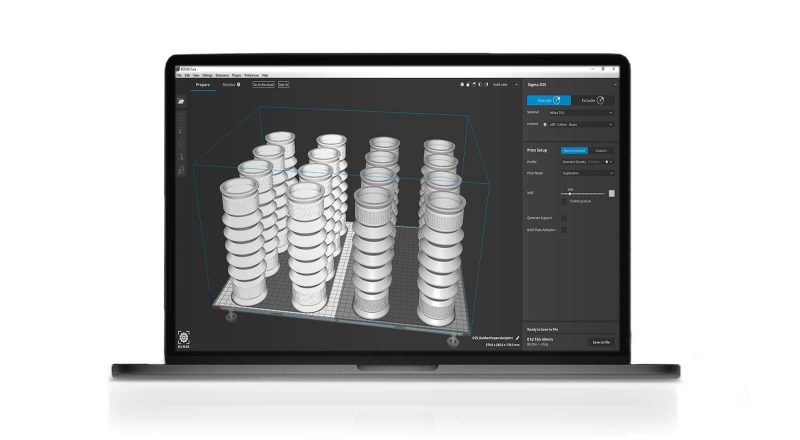 BCN3D Cura coming with the printer is compatible with Windows, Mac as well as Linux operating system. It supports file formats such as STL, 3MF, OBJ, as well as AMF.

A team of experts is ready to entertain all your complaints via phone, email, as well as Skype. They are patient and understanding.

Factors that one must look at before buying a 3D printer, to compare are mentioned below.

3D Print Speed: Excellent in batch production because of capable of printing in five different modes.

3D Printer Capability: Printing with various filaments, even with nylon-filled, is possible.

3D Printer User Expectations: Being a high-end printer, Epsilon W27 SC is able to fulfill the expectations of manufacturers in the field of 3D printing as well as professional designers.

The BCN3D Epsilon W27 SC has everything a professional 3D designer would want in terms of a 3D printing ecosystem.

Hence high-end users of 3D printing technology are primarily what the company is targetting.

Also, small business owners, looking to upgrade themselves for getting more quality can buy it.