A long term future in the field of 3D printing would not be a task that cannot be achieved using this 3D printer. It can lead to a return on investment quickly as well as benefit a lot. So, if you are considering doing business using a 3D printer, do consider this one.

Based on powder bed technology, EOSINT M280 uses a single CW ytterbium-fiber laser source for fusing objects. The maximum scanning speed of the ...
Add to wishlistAdded to wishlistRemoved from wishlist 0
Add to compare
Check Price
EOS

You will have to scroll all the way down for starting to read the complete story behind EOS’s foundation on the About Us tab, the Story option on the website.

Every year since the year of the foundation of EOS i.e. 1989 is timestamped on that page. In the year 1990 how the company’s first customer became BMW. A year later how the Stereolithography process was introduced.

However, in the year 1994, EOS became the world’s first provider of Stereolithography and laser sintering systems.

M in the name of this printer signifies metal. Before M 280, M 250, and M 270 were the printers that the company currently must have updated.

This printer, EOS M 280 was manufactured in the year 2010. Worked on the laser sintering system with 200 Watts or 400 Watts fiber lasers. It also introduced NickelAlloy IN 625, which is a rare metal material. 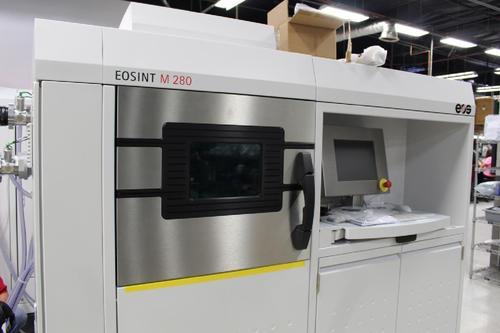 Since the company has been in the market for many years now. The complete network of the company has many partners and affiliates which include a multitude of startups including AM Ventures which is a sister company of the EOS group.

In this article, we are going to share in-depth the EOSINT M 280 3D printer’s features, specifications, and many other aspects.

This printer is the updated and further improved version of the previously offered EOSINT M 270.

The former version was said to be the leading system on the market for the additive layer manufacturing of metal components.

Speaking of the automation that is offered in this printer, the automation can directly produce top-quality metal parts based on three-dimensional CAD data.

The EOSINT M280 is a machine based on powder bed technology so, like most SLM machines, the M280’s laser source is a single CW ytterbium-fiber.

This fiber is known to radiates in the infra-red range in the order of one micrometer and the maximum processing output power available is 370 Watts.

Although one can argue that IR laser doesn’t provide efficient absorption for metal powders the theoretical beam spot diameter at the focus on the printer can be manually set via a dial from as low as 100um up to something as high as 500um.

This setting cannot be changed on-the-fly or during machining. Noteworthy is the machine’s scanning speed that can go up to 7000mm/s.

In the printer, there is a facility to have an optional, stand-alone automatic powder-sieving station that can be added.

According to the texts from other websites, this arrangement proves very useful to minimize manual operation.

It is mainly used without any hassle for ‘heavy’ and less reactive nickel alloy powder.

However, this arrangement is not advisable when you are using it for lighter, or in a way more reactive powders such as:

The reason behind this is believed that the arrangement does not operate in the inert atmosphere.

The complete system which includes the cooler & M280 & filter cabinet is said to have needed compressed air and argon or nitrogen supply lines to run safely and efficiently.

The printer comes with a Laser Power Monitoring (LPM) that makes it possible to control all the aspects of printing during the building process.

That monitoring combined with an optimized Gas Management System guarantees optimal and consistent processing conditions for the highest quality and constant part building qualities which are must-have in an industrial 3D printer.

The complete system of the printer operates in protective nitrogen as well as argon atmospheres.

This arrangement is something that allows the printer for processing a wide range of materials.

The range of the materials starts anywhere from light metals to stainless and tooling steel, as well as superalloys.

The complete process software of the printer system has been developed over a period of many years and that’s why it contains an array of intelligent exposure strategies that are extremely useful when 3D printing parts or functional prototypes.

What these intelligent exposure strategies allow is the optimization as well as the adaptation of the build process for different kinds of materials that you can easily 3D print with the printer.

The printer offers printing with a variety of powdered metal materials corresponding with parameter sets that are optimized in the printer according to the application of that final part of a functional prototype.

A result of all of these is the production of parts with standardized profiles. Additionally, the printer ensures maximum reliability by subjecting all the applicable intensive process development and high-quality assurance.

Customization according to the customer

The complete system of the printer can be designed in such a way that it is a customer-oriented process.

As you have to encounter different customers during your manufacturing business, you can feed customer-specific data in the printer and get a similar outcome.

The printer’s system’s capacity can be adapted to different customer requirements with a variety of options and additional equipment inside the printer.

The printer comes with Integrated Process Chain Management (IPCM) modules that allow you to have greater productivity, higher quality, and increased user-friendliness, and can also some other features that can be added to at any time.

The distinctive features of the printer system are the quality of the parts that it manages to produce and the ergonomically designed peripherals on the frame of the printer.

These are the features that make the printer system an ideal production tool for the economical batch-size optimized manufacture of parts at all stages of the product life cycle.

The system is bound to suit your industrial environment easily than other 3D printers.

You need to ask the company to give you a quote for this printer and this can be done by contacting the company via email or over the form.

It can be also done by filling out the contact form for the company. 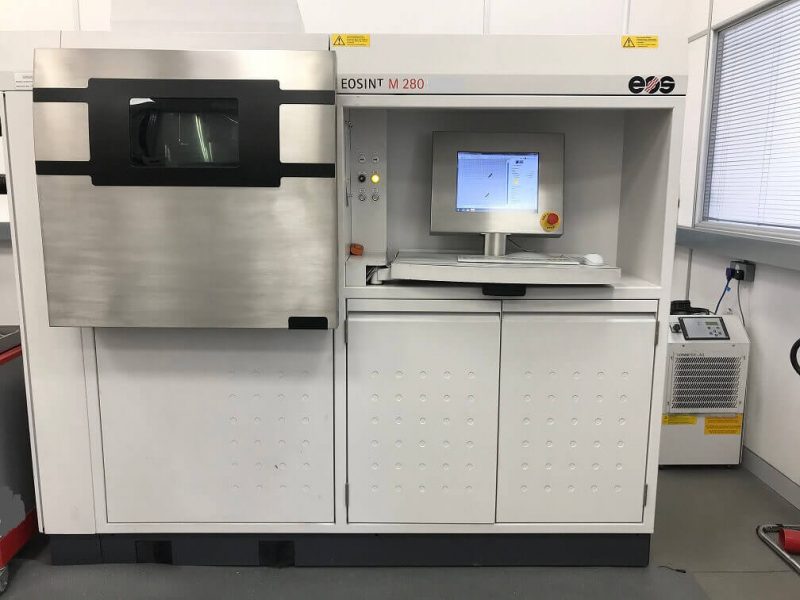 If the printer was a man, its chest height has the door and chambers that make it easy for the printer to load building platforms and powder material for 3D printing.

If the printer was home, its everyday maintenance operations like cleaning, sieving, and manual preparation steps like inspection, change of reporters are something that is done in a hassle-free way.

The rotating control table inside the printer is useful to keep an eye on what’s happening in the print chamber while you are homing/referencing the recoater and, or, leveling the building platform before the build.

The complete arrangement of the printer is such that you can visually make sure the blade doesn’t crash into anything, also it is fairly easy to unload the finished components.

However, at times it can get a bit tricky and these are the times wherein you are toppling a full-size-chamber build over.

This is for emptying it and brushing the powder off before unloading while operating the wet separator of the printer.

As a production unit, the wet separator is meant to be left on continuously. It also requires at least 6 hours for warming up before it can be used. This is for allowing the laser source to warm up and stabilize.

Additionally, for the cooling unit to reach a suitable coolant temperature.

So, when the chamber door is open all the cooling work is carried out while wearing a mask, gloves, lab coats, or other safety equipment like protective clothing and antistatic shoes.

Depending on the type of powder, an additional antistatic bracelet has to be worn as recommended by the company.

And although this all sounds a bit cumbersome, in people’s experience, it’s easier than to wrestle clumsily with the glove box as this is something that also affords greater flexibility and movement range and enables faster maintenance/preparation.

The printer comes completely assembled, all you have to do is read the manual, watch the videos of the printer in action as well as see the FAQs mentioned on the printer’s manufacturer’s website.

Doing so, would mostly clear all your doubts regarding the printer’s parts, how they operate, and how to monitor them.

You will also learn about when to monitor which specific section during a specific time of the printing process.

But all this can happen only when the based knowledge regarding the printer stands firm and that can come by going through the manual provided by the company as well as asking the doubts at the same moment when it arises in your mind.

This printer is based on SLA 3D printing technology wherein a laser of high power is used for curing the part or functional prototype that you wish to 3D print.

The printing cost per part of this printer is going to be higher than FDM 3D printers, although not always, but mostly.

To calculate the difference in the printing cost you need to take into account more than one factor, such as infill, the electricity, etc. 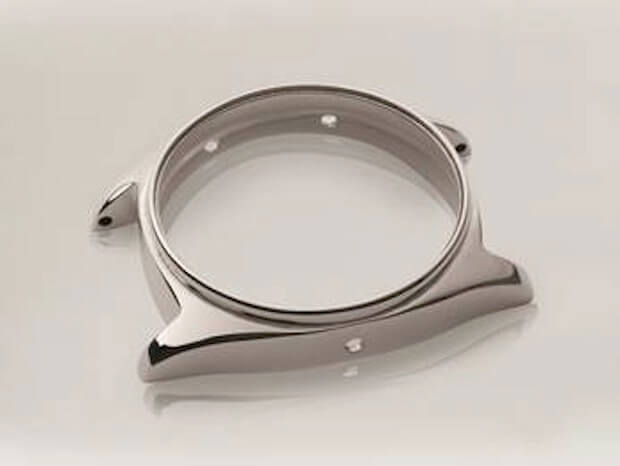 This 3D printer is known to produce 3D parts and functional prototypes which find an application in many industries.

And hence we are assuming that the part quality would be dimensionally accurate.

On the printer’s manufacturer’s website, there is a tab titled Success Stories wherein the industries are listed where the 3D printers made by the company found their application.

The list contains names of people and health, mobility and logistics, and aerospace, which are the industries that require an immense amount of precision from the manufacturing device. 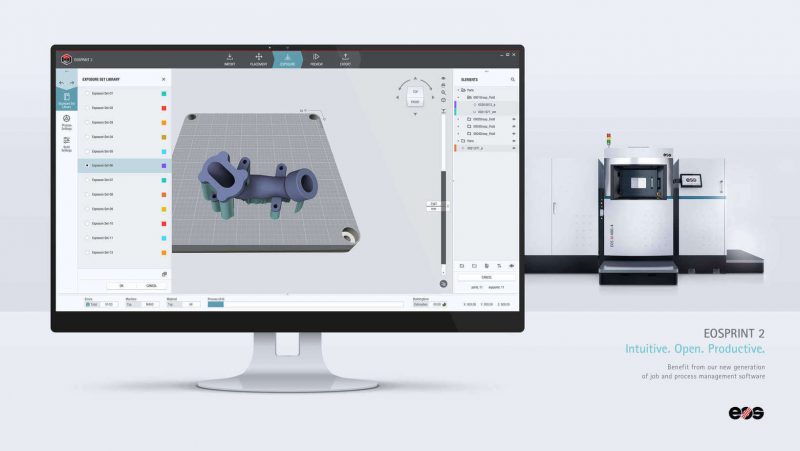 EOSPRINT is the name of the software that includes EOS ParameterEditor, EOSTATE Everywhere, EOSCONNECT Core, Materialise Magics Metal Package, and modules, which is recommended to be used with the 3D printer.

There is a tab titled Customer Center on the website of the printer’s manufacturer that has all the digital support that a user of a 3D printer can imagine.

Apart from this digital support, the other way to communicate with the company is the contact form, email id, phone number, or video call.

The factors that should be taken into account while purchasing this printer are mentioned below in a short way that would not consume much of your time.

3D Printer cost: You would have to contact the manufacturer to get the quote for this printer.

3D Printer Practicality: The application of this printer is something that is found in many industries including healthcare, automotive, and aerospace defense.

3D Printer User expectations: The printer specifically stands upon industrialists in the field.

A long term future in the field of 3D printing would not be a task that cannot be achieved using this 3D printer.

It can lead to a return on investment quickly as well as benefit a lot. So, if you are considering doing business using a 3D printer, do consider this one.