Fuse 1 made it to the market at a very low price compared to other industrial printers. This printer should be your go-to printer if you are a small business owner whose customers are getting rid of the quality that FDM and SLA printers provide.

Formlabs is a Massachusetts based company started in the year 2011. In the year 2017, the company introduced its first selective laser sintering 3D ...
Add to wishlistAdded to wishlistRemoved from wishlist 0
Add to compare
Check Price
Formlabs

The Formlabs Fuse 1 is a professional SLS 3D printer manufactured by a Massachusetts-based company named Formlabs. This company was founded in September 2011.

Six years after the company was formed, the company came up with this printer i.e. The Formlabs Fuse 1, in June 2017.

The 3D printer uses the Selective Laser Sintering (SLS) 3D printing technology wherein a laser is used to precisely fuse the Nylon powder layer after layer until the part is finally done.

And they were offering the same build volume as this printer did. So, Formlabs Fuse 1 was a breakthrough printer that was able to consume a lot of the market share because of its lower price range.

SLS technology was new when this printer came into the market and so the industrial-grade printers based on SLS 3D printing techniques were available only at high prices. 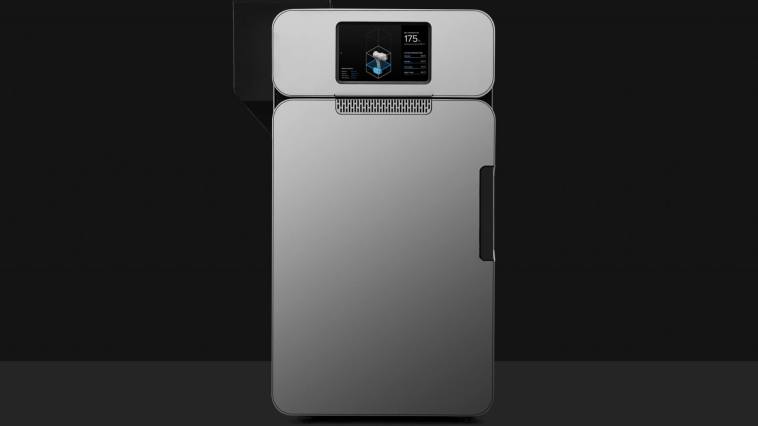 Fuse 1 made it to the market at a very low price compared to other industrial printers. In this article, we will let you know about the amazing list of features it has, what are the printer’s specifications, print quality, and other details in depth. So let’s get started.

There are many amazing lists of features that this printer has because of which it was a breakthrough printer. Let’s explore them one by one.

Support Free Structures can be built

Most of the techniques of 3D printing before the invention of this one i.e. FDM and SLA demand from you to use structures that can support the final print.

So support structures have always been a pain in the ass of the designers who are looking for accuracy in their parts and functional prototypes.

Fortunately, Fuse 1 does not require any support structures. So the parts and functional prototypes that are printed using this printer are free.

Also, they do not have any risk of damaging themselves from the support structures.

This also reduces the overall waste that a printer produces. This also results in a reduction of the material cost and so, overall printing cost is reduced.

Complex geometries of parts can be produced within hours

Fuse 1 is a star printer in the market, not just because it can print complex geometries, but also because it can do that in a commendable amount of time. The parts or functional prototypes that would otherwise take a lot of time to be manufactured can be built faster.

Parts that can be used in industries like aerospace, dentistry, medical, etc. have to be large in size and volume. So, not every printer can build them. You need to have a printer that has a build volume which is large enough.

Otherwise to divide the total build volume and design it in such a way that you can assemble it later. If you buy Fuse 1 you can build a considerable amount of parts that can be used in these industries.

So, this is where the printer’s huge print bed can be in use. And this is rare for benchtop SLS printers. Never before has an SLS printer had built volume as much as Fuse 1 does have.

This is a solution for not letting any part of the final product damage. Also, this amazing feature is responsible for less downtime.

While you are doing mass production of some part or functional prototype it is essential to calculate the downtime of the printer that you are going to use for 3D printing of your product.

Printing With up to 50% recycled powder

In SLS, as explained above, you have to apply the powder of the material that you wish to print with on the print bed. It is this powder that can be recycled 50 up to 50 percent.

This puts the printer just in the perfect situation as an environmentally friendly printer. Also, this technique, in general, is very environment friendly, because it uses metal powder.

So the wastage of the complete system is not that often. And the fact that this printer does not need any support structures is what makes it more awesome. Overall, this printer is way too less waste producing. 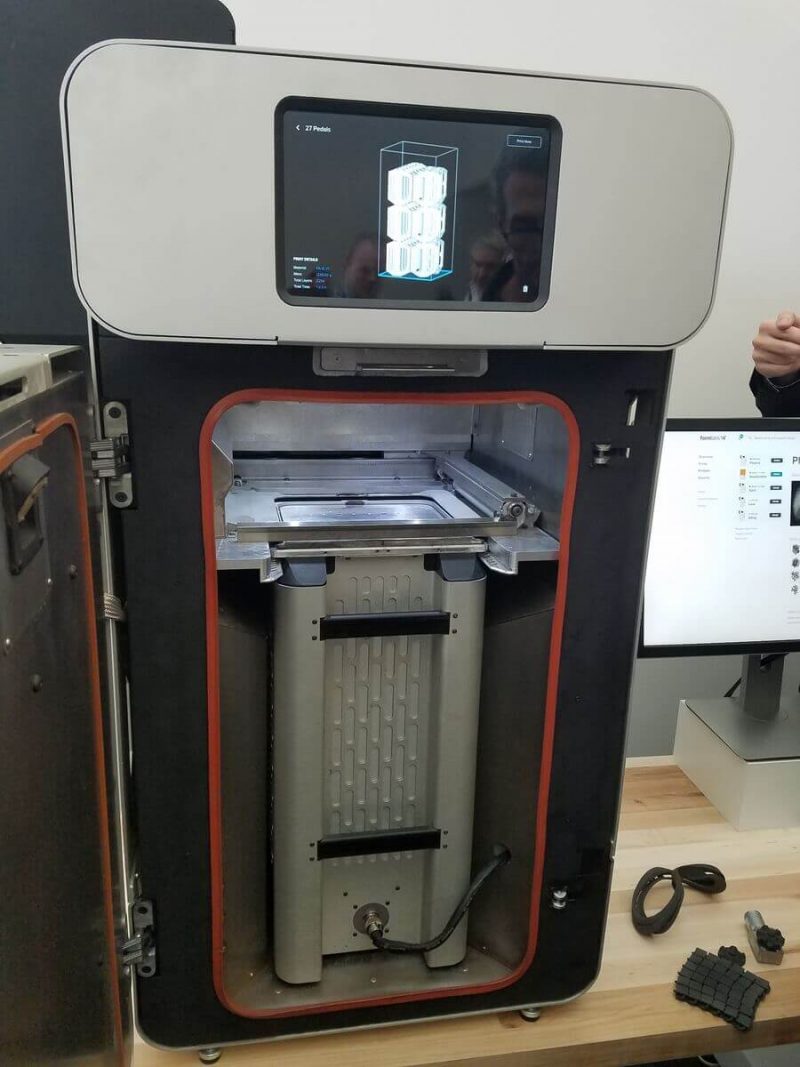 The material refresh rate of this printer is up to 50 percent. The dimensions of this printer are 677 mm * 668 mm * 1059 mm. The industries in which this printer can be used are Automotive, Consumer Products, and entertainment.

Fuse 1 is has a closed system for 3D printing parts and functional prototypes. The laser that is used for curing materials is fiber rated to greater than 10000 hrs, has 1066 nanometre wavelength and 10 Watts power.

The spot size of Fuse 1 is 200 microns and the bed leveling of it is automatic. You can connect with the printer using Ethernet and Wi-fi.

Formlabs Fuse 1 is available in the market at the starting price of $9,999. However, this price is for the 3D printer and the build chamber only. 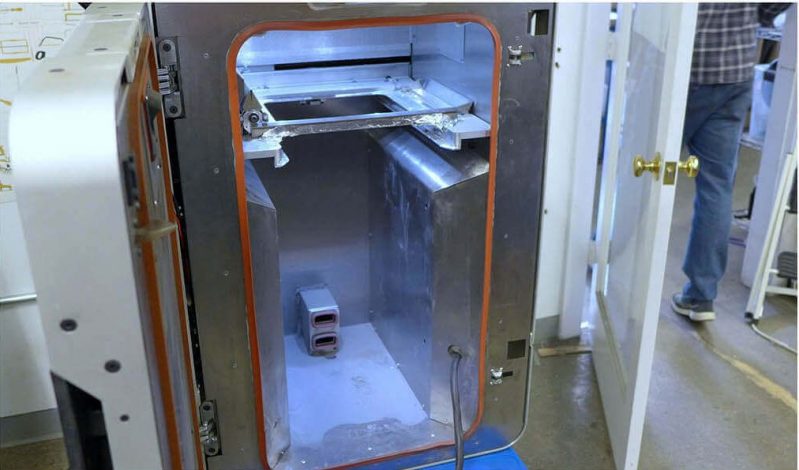 The printer looks just like a refrigerator. There is an upper compartment and the lower. The former is a smaller rectangle than the latter. The upper compartment has a touch screen interface from which you can operate the printer.

While the lower one has many things, starting from the print bed, the cooling fans, and the complete mechanism of SLS.

SLS technology uses a laser to cure the material. In Fuse 1, we can only print with one material i.e. Nylon 12. But roughly 90 percent of the SLS industry prints with Nylon PA.

You will be able to monitor the print progress using this printer. If anytime there is a problem, you will be able to see from the screen at getting to that end, stop the problem if it is happening and sense it and stop it even before happening.

The printer comes completely assembled when it is shipped to you from the manufacturer. All you have to do is find a suitable place for the printer and complete your workstation.

Dimensional accuracy is possible to achieve using this printer. The intricate detailing of edges and curves can be easily achieved and most importantly when the part or functional prototype has been printed, it does not any layer visibility, unlike FDM or SLA.

So the printing cost of this technique is generally high. Even the cost of materials with which one can print using this printer is very high.

This printer uses Nylon PA 12 in its powder form as a material for 3D printing parts and functional prototypes.

This material is industry standard and more than 90 percent of the printers based on the same technology use this material because it is known to generate strong end-use parts and durable prototypes. You can buy this material from the manufacturer’s website as well. 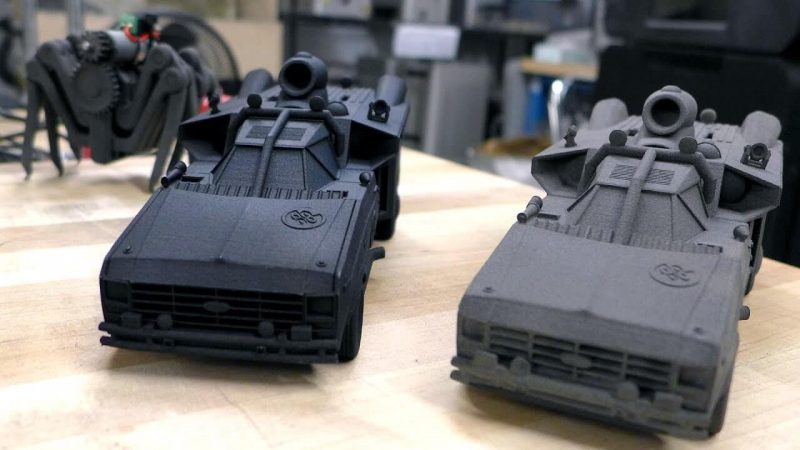 Quality is where this printer steals the show. In its introductory video, you are shown how this printer can manufacture a bicycle seat with accuracy.

The manufacturer’s website has a mention of innovative headphones that do not have a solid connecter between the right one and the left, but it’s very flexible.

There is also a hand glove that is shown on the website and all of these indicate the perfect quality of parts and functional prototypes that Fuse 1 can produce.

There is also a wind blower that is very cool and can be used for many purposes. The company started with an aim to produce a printer that can make necessary things and they stand by it.

Engineering, manufacturing, dental, electronics, education, healthcare, entertainment, jewelry, and audiology are some of the industries in which parts and functional prototypes produced by this printer are useful.

SLS is a technique that has a reputation for producing high-quality objects and parts and with Fuse 1 the company claims to offer minimum layer thickness i.e. 100 micrometers.

The printer is designed to 3D print objects with the same mechanical properties that can be expected from a professional 3D printing service bureau.

Slicing software that users need to use is Preform. The printer can be operated on a Mac device as well as the computer working on the Windows operating system.

This software is one of the most user-friendly software available in the market. Though the manufacturer of this printer hasn’t kept it open-sourced.

This software doesn’t require any technical knowledge. One can easily learn it while using the software.

Although the printer comes completely assembled, you can contact the manufacturer at any point you wish to for assistance. There are many ways of doing this, you have one way on your website.

The other way is to email them. If needed the company’s agent can reach out to you on Skype. You can video call them to know the exact place where the solution to the problem in your 3D printer lies.

Below mentioned are some of the factors in brief that will let you decide whether you should buy a printer or not in a limited amount of time.

3D Printer Cost: The cost of the printer is something that shook the market because there wasn’t a printer in SLS 3D printing technology that was of industrial-grade available at a price as this printer was.

3D Printer Capability: It cannot print with more than one material.

3D Printer Practicality: The parts and functional prototypes printed using this printer are used in many industries.

This printer should be your go-to printer if you are a small business owner whose customers are getting rid of the quality that FDM and SLA printers provide.