PETG vs PLA – Which 3D Printing Material is Better?

The polyester category of plastics includes PETG and PLA filament. Both are thermoplastics, like other FDM 3D printing filaments. That is, they soften above a certain temperature and then solidify when cooled.

This technique can theoretically be continued indefinitely without deteriorating the material quality. The diameters of most PLA and PETG filaments are 1.75 mm and 2.85 mm, respectively. The question is: What are the differences between PETG vs PLA?

In brief, if the physical qualities of the filament are important to your 3D printing application, PETG would be the first material to investigate. If, on the other hand, your project requires a precise and high-quality appearance, PLA is the way to go.

In this article, we’ll look at the differences between these two popular filament kinds in order to help you decide which one is best for you. Let’s begin! 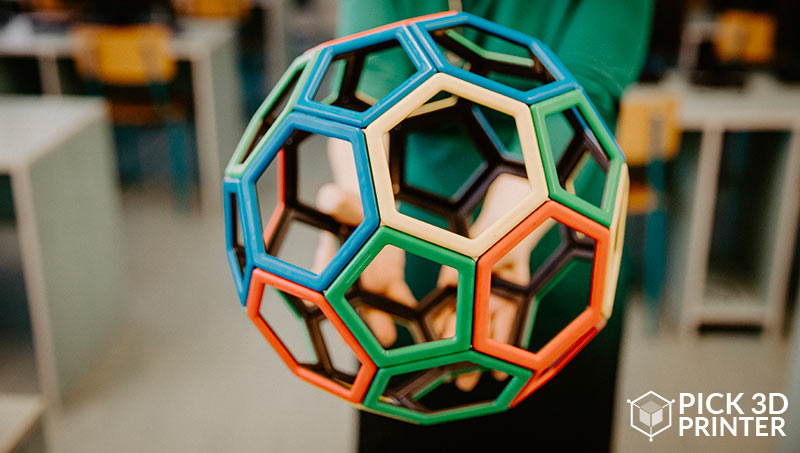 PETG has a substantially higher temperature tolerance than other materials. Extreme PETG blends, such as Nexeo 3D’s Arnite 3040, can withstand peak temperatures of up to 250 °C. PETG, on the other hand, has a more common temperature tolerance of roughly 75 °C. In order for 3D printed PLA parts to stay firm, they must be kept below 55 degrees Fahrenheit.

The easiest way to produce transparency is with a PETG filament, such as Taulman’s T-Glass. Nonetheless, PLA offers a number of high-quality transparent filament brands to pick from. Exact color matching is easier with PLA, as evidenced by this PLA from Innofil, which has RAL color codes that are perfectly matched. 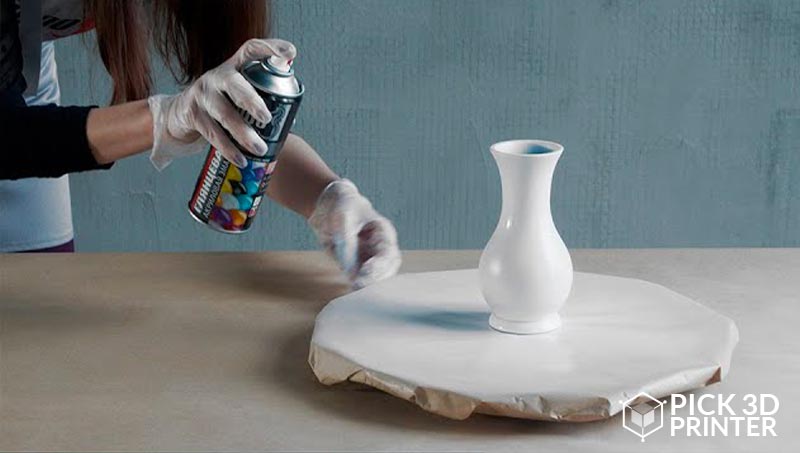 PLA benefits from post-processing. Acrylic paint can be used to paint your 3D print if necessary. However, like with any paint, perform some tests to ensure that it has adequate adhesion, durability, and other properties that are vital to your project. PLA is difficult to glue, but a decent place to start is with polystyrene-friendly glue.

PETG isn’t something you should attempt to glue. But if you do, please let us know how you got on with glueing PET bottles together!

Check out How to Paint 3D Printed PLA Parts

PLA is preferred over PETG because it is biodegradable and recyclable. If PLA is kept outside for an extended period of time, it will eventually decompose into its natural components.

PLA and PETG may both be recycled and repurposed to create “new” filament. Although PETG does not degrade as quickly as other plastics, it is still technically recyclable.

For more information about biodegradable materials, check out this Guide To Green 3D Printing.

PLA makes bed adhesion easier. While PLA may be 3D printed without a heated bed, PETG requires a bed temperature of 50 to 70 °C.

PLA also warps less and sticks to the bed better than PETG when heated to the same temperature. For both filaments on glass, a spritz of hairspray or some PVA glue works great – clean glass, not so much.

PETG, on the other hand, tends to stick too strongly to a PEI-topped print bed. To avoid this, use a little PVA glue to assist prevent the PETG from clinging too well to the bed. For both PETG and PLA, print temperatures vary depending on whatever blends you use, but PLA prints cooler.

Just be careful not to go too cold, as this can clog the nozzle. PETG is more prone to stringing and leaking. You might try printing with lower nozzle temperatures to reduce stringing and oozing.

To avoid excessive bed adhesion, the nozzle spacing with PETG should be slightly larger than with PLA. You can avoid readjusting the bed height (Z-axis height) for PETG by setting the Z-axis height in the slicer for that specific PETG 3D print job if you generally print with PLA.

Beyond the material’s foundation, both polymers have a lot in common in terms of technical qualities. They are both noted for being simple to print with, for example. In reality, PLA is one of the easiest, if not the easiest, 3D printing materials to work with. As a result, it is understandably popular among beginners.

PLA can be produced at much lower temperatures and does not require a heated printing bed or a closed chamber, therefore this is largely due to heating. Extrusion temperatures for PLA should be between 190-220°C (374-428°F), which is lower than for PETG.

PETG is also one of the simpler materials to print with, albeit it is not as easy as PLA. PETG also does not require a closed chamber, which is a big plus. PETG, on the other hand, necessitates a heated printing bed due to greater temperature requirements, thus limiting the printer options for some customers. 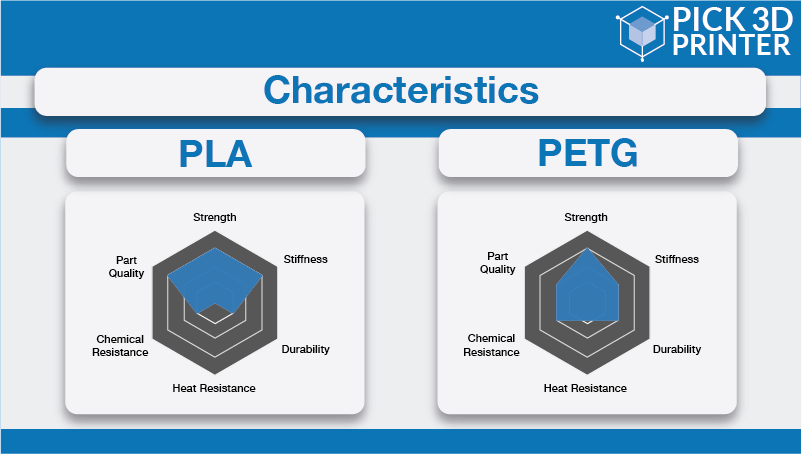 One of the most significant differences between PETG vs PLA is, of course, the manufacturing process. PLA is distinguished by the fact that it is created from renewable and natural raw ingredients such as corn. It is also biodegradable under the right conditions, making it a popular choice for individuals looking for environmentally friendly, long-lasting materials.

PETG, on the other hand, is well-known for being made of PET, a well-known thermoplastic. Glycol (G) is added to PET (Polyethylene Terephthalate) at the molecular level to make PETG.

PETG is stronger and more durable than PET, and it is also more flexible for 3D printing, preventing it from becoming brittle when printed. PETG is 100% recyclable, however, because it is an oil-based polymer, it is not biodegradable like PLA because it is not created from raw materials.

If you’re looking for a material with good physical qualities, PETG is a better choice than PLA. PETG, unlike PLA, is resistant to water, chemicals, and fatigue. It’s also more durable and less stiff than PLA.

PETG is commonly thought of as a cross between ABS and PLA. That is, it combines the best aspects of both to some extent. PETG, for example, is more flexible than ABS and stronger than PLA (but weaker than ABS) (though less flexible than PLA).

As a result, PETG is a popular material since the shortcomings of both materials are mitigated inside it. PETG is also stiffer than PLA, which has its own set of advantages, particularly in industrial applications.

PETG becomes more robust over time, yet many customers complain about how easily it scratches. Keep in mind that PETG is sometimes reinforced with carbon fibre, which makes it considerably stronger but also more expensive.

PLA can, of course, be reinforced with carbon fibre, albeit due to the characteristics of both polymers, it will be weaker than the PETG version. PETG has also been mentioned as a good material for making parts that are flexible yet nevertheless shock resistant.

Neither PETG nor PLA is known to be UV resistant, while PETG is known to have a better heat and UV resistance than PLA, implying that it may withstand more exposure to the elements before breaking down.

When compared to a plastic-like ABS, which may be extremely damaging to the user’s health, PETG and PLA are both known to be non-toxic and generally odorless (PLA can have a little sweet smell due to its nature). However, it is still unknown if certain materials extrude hazardous gases or not;

PLA and PETG, for example, have not been discovered to be poisonous, but you should always be cautious. Furthermore, PETG and PLA are less prone to warping than ABS, albeit the fact that PETG requires a heated bed suggests that the risk of warping is higher than PLA. 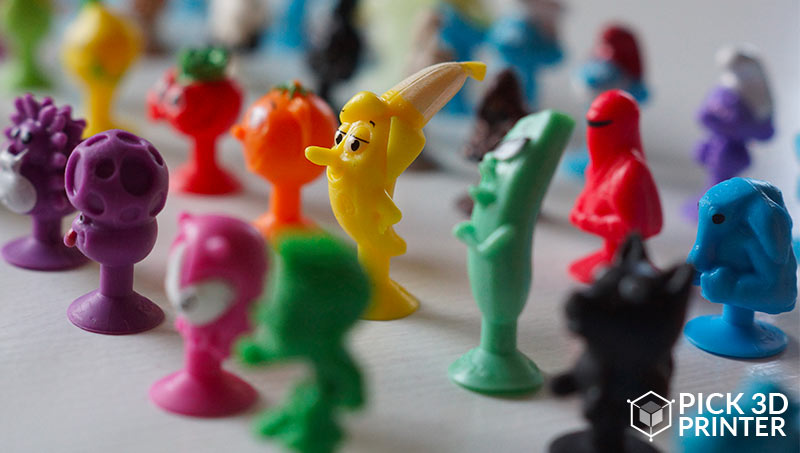 PLA and PETG have a lot of applications in common, which is to be anticipated for polymers with similar characteristics. They’re both employed in the food, medicinal, costume/prop production, and decorative components industries, but each material has its own advantages.

The food business, for example, should be the first application that comes to mind when thinking of PETG.

PET is a water-resistant and long-lasting substance that is used to produce containers such as plastic bottles. Not to add that PET accounts for 18% of global plastic output, indicating that it is suitable for contact with food.

PETG has similar qualities and has been approved by the FDA. PETG’s water-resistance and increased heat resistance make it perfect for items that will come into touch with food, such as Tupperware.

PLA, like PETG, is regarded as food-safe, but to a lesser extent. For one thing, unlike PETG, it is not resistant to water, making it less suitable for food industry applications. However, the extent to which PLA is food safe has also been called into doubt in recent years, and users must confirm that PLA does not contain any other additives.

Both materials are also used in the medical field, albeit in slightly different capacities. PETG is a useful material for medical implants as well as pharmaceutical and medical device packaging since it can tolerate sterilisation.

PLA is especially popular in the medical field, where it can be used for implants that are expected to biodegrade over time because of its biodegradable nature. It could also be utilised for sections that need to release medicine into the body over time.

Although PLA is less expensive than PETG, it is typical for manufacturers/resellers to price their low-end PLA higher than their low-end PETG. Both might cost over a hundred dollars in terms of high-end materials.

Something to bear in mind with both materials is that the quality of the filament determines the price; both materials can range in quality from low-quality filament intended for amateurs to the semi-industrial-grade filament.

Additionally, any PLA or PETG filaments that contain other components, like carbon fiber, will be more expensive. It’s a good idea to look at the major manufacturers and compare prices based on your unique demands while looking for filament.

PETG filaments are available from most PLA filament suppliers. As two of the most basic 3D printing filaments, it would be surprising if any large provider did not stock at least one of them. Many of the suppliers on our list are the largest filament providers in the world.

This is, of course, another benefit for people who are new to 3D printing or who wish to use a certain type of filament: thanks to the wide range of manufacturers, finding the price and attributes you require for a filament will be much easier.

Despite the fact that the list we’ve included isn’t exhaustive (the entire list could potentially be many articles in and of itself), we’d like to highlight some of the market’s most important suppliers. 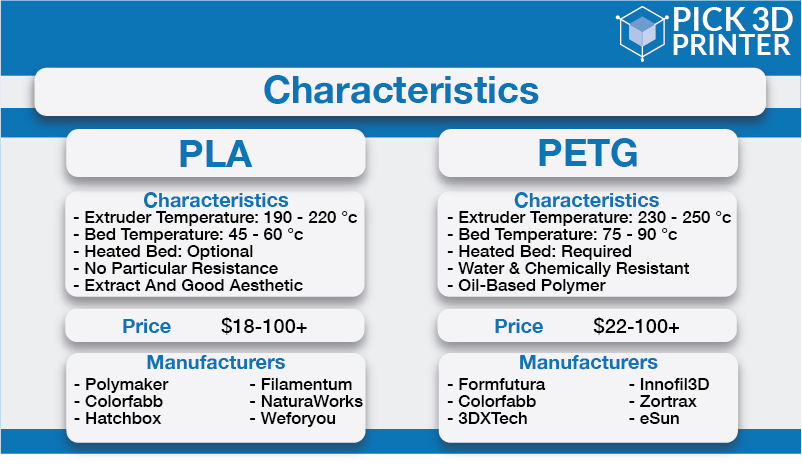 If you’re a newbie, PLA is a safe pick, but if you’re feeling confident and want to produce usable components, PETG is the way to go. With understanding the differences between PETG vs PLA, it is obvious that both the filaments have their own perks and limitations. When it comes to selecting one among the two, choose the one closest to your goals.