Wanhao Duplicator 9 Mark II is a perfect choice for makers, engineers, designers, and advertising agencies, etc., those who want to do average size 3D printing.

Its various advanced features combined with its affordable price tag make this printer a real gem.

Alongside, the printer has got plenty of things to appreciate in terms of design that offer amazing functionality in the best efficient ways to ensure praiseworthy results.

Wanhao Duplicator Mark II 900 is different from its predecessor, D9 Mark I in terms of the profile. The former supports a double Aluminum profile along the Y-axis which reinforces the rigidity of its entire structure.

Wanhao takes immense pride to declare how the smoothness of the bed movements along the Y-axis of this 3D printer was improved by adding more rollers on the rails.

With that there is also a change in the auto-leveling sensor; the printer features the BL Touch electrochemical auto-leveling sensor. The printer’s print head independently passes through various points and saves the data that it has to take into account while printing.

Below mentioned are some of the unique features that distinguish Wanhao Duplicator 9 Mark II from other 3D printers in the same price range.

Customizable cooling fan system: This feature is helpful after you are done with 3D printing a part or functional prototype. By letting you specify the speed of cooling, Wanhao gives you an opportunity to increase your overall print speed for printing objects on Duplicator 9 Mark II. And by raising the fan, you do not end up in the trouble of non-uniform cooling. Even after increasing the fan speed, the cooling of your parts and functional prototypes are completely uniform.

Unique MK 10 Extruder and high precision sensor: Wanhao has got in place a unique MK 10 Extruder in Duplicator 9 Mark II which provides you the smoothest extruding known in the market. It lets you easily load and unload the 3D printer filament on the printer. It is extremely reliable and the extra cooling fans make your prints sharper than ever. Overall, the extruder increases your print quality.

High precision sensor present inside Duplicator 9 Mark II lets you auto level the bed guaranteeing you that the first layer of your print will not be messed up with. And hence the complete part or functional prototype will be perfectly dimensionally accurate.

You have in place in Duplicator 9 Mark II an easy remove the magnetic upper mat. This lets you remove the printed part or functional prototype with ease. The objects that are created can be removed without putting them into any danger of damaging any ends of them.

Resume printing after power interruption: In case you’ve had an unexpected power outage in the middle of the 3D printing process, there is no need to worry about the backup. Duplicator 9 Mark II offers a complete backup of your print progress. The machine will save the work that you’ve done in case of a power outage and let you resume from the same point after the electricity is back in place.

Wanhao Duplicator 9 Mark II creates parts and functional prototypes using FDM 3D printing technology. It has a single extruder and can be connected using an SD card or USB cable.

The filament diameter that you can use on this 3D printer is 1.75 mm. The nozzle size of this 3D printer is 0.4 mm. You can print with 3D printing materials such as PLA, PVA, PEVA, Nylon, and any material having melting point below 300 degrees Celsius.

There is an LCD touch screen user interface that is available in English and Chinese which lets you control various functions of the printer. The packing size of Wanhao Duplicator 9 Mark II is 82 cm * 71 cm * 29 cm.

The maximum print speed with which you can print a part or functional prototype on this 3D printer is 70 millimeters per second.

The platform holder is made of Steel. The layer thickness range of parts and functional prototypes that you can 3D print on this 3D printer is 100 microns to 400 microns.

Wanhao Duplicator D9 Mark II 400 is available at a price of $579 in the 3D printing market. 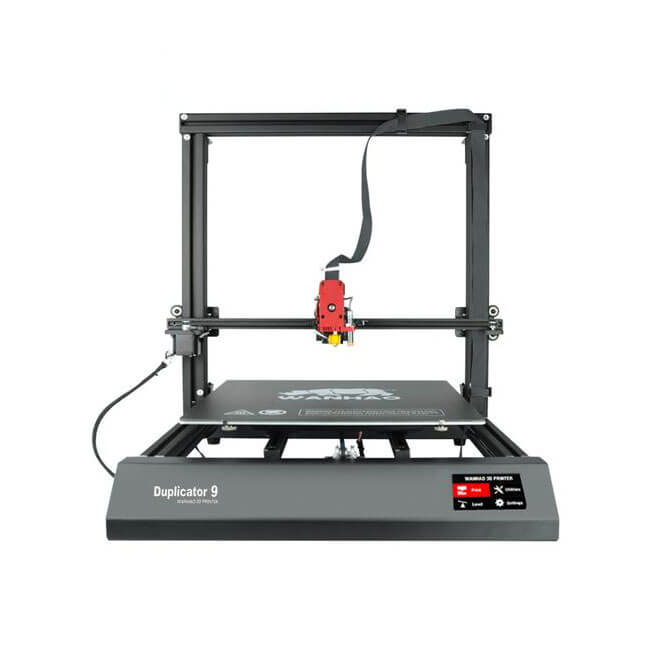 Wanhao Duplicator D9 is an open Cartesian-based 3D printer. There is a filament spool holder connected to the print head of this printer which connects the two standing pillars of the printer.

The print bed of this printer is connected with the head in an inclined manner. There is a touch screen user interface present on the right bottom of the body of this 3D printer.

The nozzle system of this 3D printer can move up and down using the rails that are present on the two standing pillars of this printer. 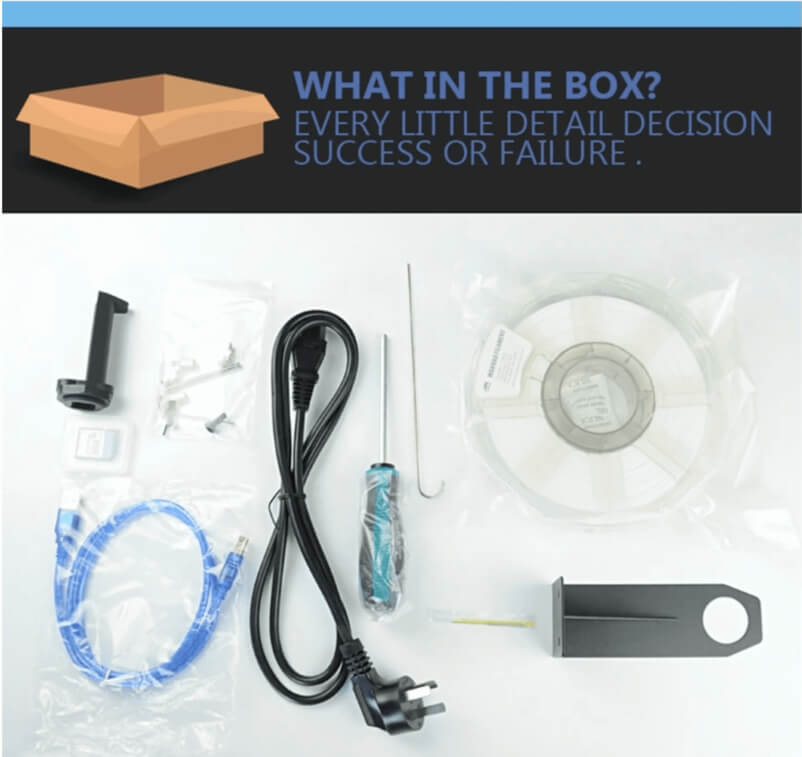 Duplicator Mark II 400 comes partly assembled. When you will unwrap the package, you will find that the 3D printer contains the base with a print platform, the X-axis construction with a pre-installed extruder, an aluminum profile for assembling the U-shaped frame, and two supports. Apart from these, the package also contains:

Depending on your exposure to 3D printing and especially FDM 3D printers, the setup of this 3D printer can take up to 1.5 to 2 hours.

You will have to undergo the user manual and follow the sets to set up the machine before starting from the first print.

To simplify the process of assembling this 3D printer, there are tags and stickers mentioned with numbers on the components that come inside Wanhao Duplicator 9 Mark II 400. There is also a video available online which you can refer to.

Wanhao Duplicator 9 Mark II is based on FDM 3D printing technology. Herein a solid filament spool is used to 3D print a part or functional prototype.

The material with which you wish to 3D print an object is fixed in the filament spool holder of the printer. That material is then heated enough to reach the glass transition temperature.

Once it reaches the glass transition temperature, it is allowed to melt via a nozzle system to reach the print bed of the printer.

Layer by layer the part is laid down according to its geometry which is fed to the 3D printer.

3D printing requirements differ for different parts and functional prototypes. Sometimes you may need support structures and rafts, especially while 3D printing hollow structures. And, other times, you may not.

Hence, the overall cost of 3D printing a part depends on the geometry of the object that you are willing to 3D print, the material of the filament, the amount of infill that is needed, and a lot more different attributes. 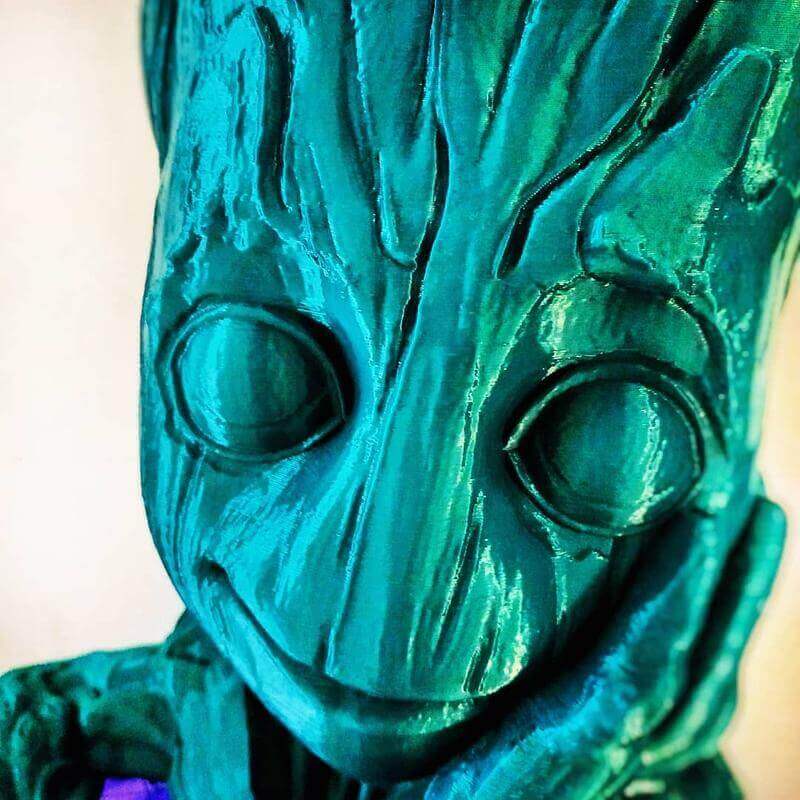 The first benefit of Wanhao Duplicator Mark II 9 is that it can print a bigger build volume than its former version. So, you can print parts like Wanhao France, White Vase, and a lot more in one go.

With a high precision sensor installed in the 3D printer, Wanhao permits you to do more smooth extruding and easy loading as well as unloading of filaments.

These minor improvements lead to the overall impact on surface finish and texture of the parts or functional prototypes that are 3D printed.

Machined mounts provide better dimensional size and strength in all the parts and functional prototypes manufactured on the 3D printer.

The layer thickness range that you get on each and every part and functional prototype printed on the printer is 100 microns to 400 microns. 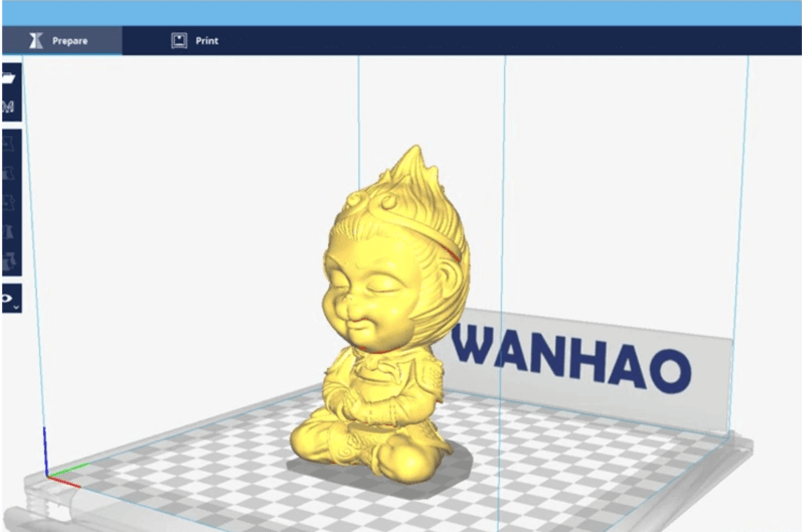 This software has a wide range of settings that are sufficient for printing every model you wish to.

You can use the software to set a specific print speed, temperature, layer thickness, density, the diameter of the nozzle and do the settings in case you feel like placing the supports.

There are videos and photographs available online to assist you in setting up this 3D printer. For your doubts, you can drop an email to the technical support team and wait till they get back.

The main aspects of this 3D printer like cost, quality, speed, practicality, capability are mentioned below in brief.

3D Printer Cost: Barring in mind the maximum print volume offered by the printer, the cost is extremely affordable.

3D Print Speed: Lower than that of other FDM 3D printers in the same price range.

3D Printer Capability: You can print with any 3D printer filament that melts before 300 degrees Celsius on Duplicator 9 Mark II.

Wanhao Duplicator 9 Mark II is a perfect choice for makers, engineers, designers, and advertising agencies, etc., those who want to do average size 3D printing.

It is an improved version of the past which is the most striking point. The printer is very stable during the complete 3D printing process.

However, issues like 3D print speed and enclosure are a bit of a concern. But apart from that, the printer lets you print parts and functional prototypes in one go and can be used to print objects that find an application in varied spaces.