Unlike other printers in the same price range, the Zortrax Inventure works with a range of external as well as dedicated materials. These 3D printing materials are available either in smart cartridges or standard spools.

Supporting single as well as dual extrusion, using Inventure you can print supports and models with the same filament, as well as a print model and ...
Add to wishlistAdded to wishlistRemoved from wishlist 1
Add to compare
Check Price
Zortrax

Here we go, the printer has the following points that stand out from others in the same price range.

Read about it and compare and make sure you get the set of these features in any printer that you decide to buy in the same price range, otherwise, buy the Zortrax Inventure.

Running of the printer is possible in two different modes. According to the user’s choice, one can run the printer in single as well as dual modes.

The single-mode means running the printer with a single extruder would allow the user to print supports as well as the models using the same filament.

Whereas running the printer in dual-mode would mean the printer would run with dual extruders where the model of the printer and its water-soluble supports can be printed with two separate materials.

This is a very comfortable option to run any printer and has to deal with the flexibility offered to its user.

Unlike other printers in the same price range, the Zortrax Inventure works with a range of external as well as dedicated materials.

These 3D printing materials are available either in smart cartridges or standard spools.

An important thing to note here is, the printer can run with external as well as dedicated materials, in single as well as a dual-mode of 3D printing.

This means that it does not matter to the printer if you use the external as well as dedicated material while printing using a single extruder or a mix of all using dual extruders.

One of the most important features to have in any FDM 3D printer is the enclosed printing chamber.

This ensures that the generation of temperature happens relatively fast than it happens when the print chamber is open.

Not only does this decreases the overall print speed, but also it seals the build platform from the ambient environment in which the printer is kept.

This ensures that the printing happens under controlled conditions which increases the overall quality of parts and functional prototypes that are printed using the Zortrax Inventure.

The Zortrax Inventure comes with a HEPA filter that intercepts over 99 percent of the 3D printing emissions.

This deals with a very prominent issue when 3D printing any part or functional prototypes i.e. the issue of smelling plastic.

Since most of the materials that you can use for FDM 3D printing are thermoplastic and knowing the fact that FDM 3D printing works by melting them, the person who is nearby the 3D printer has to deal with the smell of the plastic.

Also, the heat that is generated needs to be given out open in the atmosphere.

For dealing with both of these issues the manufacturer of this printer has equipped it with a HEPA filter that helps in dealing with this emission.

All the 3rd party filaments that are available in spools are supported by the printer both, in single, as well as in dual extrusion modes. 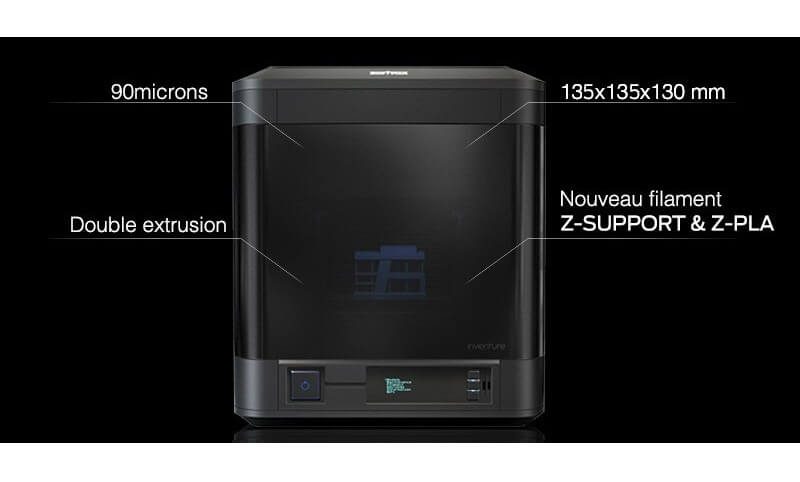 When you wish to print with model and support structure you can use the printer on its dual extrusion mode.

The printer is equipped with a material detection sensor for detecting when the filament cartridge gets over.

There is a chip that the printer comes with, which has information about the material type, color, and consumption.

In addition to all this, the printer comes with a HEPA filter that takes in all the emissions given out by this printer.

For connecting to this printer, you can use the SD card provided by the manufacturing company.

The manufacturer of this printer claims that the printer is based on LPD plus i.e. Layer Plastic Deposition technology which is used for deposition of advanced thermoplastic using water-soluble material.

The parts and functional prototypes printed using this printer have a layer resolution range of 150 to 200 microns. Wherein the minimal wall thickness is 450 microns.

The printer is equipped with sensors that automatically measures platform points and height. As mentioned above, the printer has a closed heated chamber.

The recommended operating temperature range of Zortrax Inventure is 15 to 30 degrees Celsius.

Some of the filaments that the company dedicates to single extrusion are Z-NYLON, Z-ULTRAT, Z-PETG, Z-GLASS, and Z-PLA.

Whereas those for dual extrusion are Z-PETG, Z-PLA, Z-ULTRAT Plus, and Z-SUPPORT Premium. All of these filaments can be bought from the company’s website.

The support structures used for manufacturing complicated parts or functional prototypes can be mechanically removed are printed with the same material as the model Water-soluble or can be printed with a different material than the model, as the printer runs on two modes. 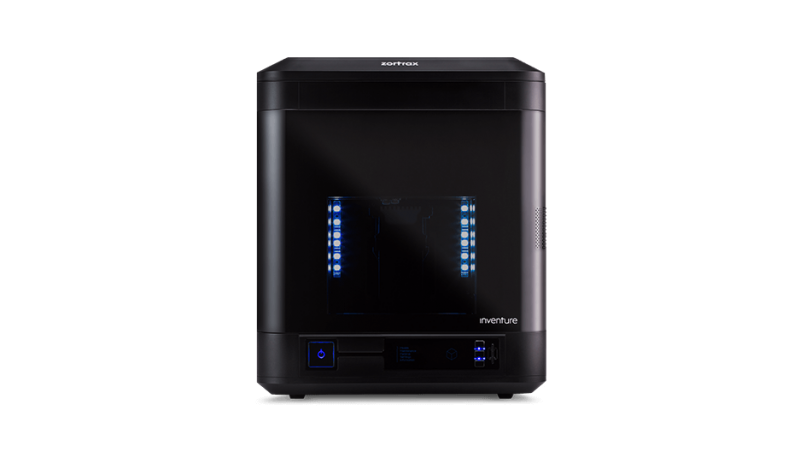 There is a video of the printer running behind the text which you first encounter after landing on the webpage specially dedicated to this printer. This video takes you pretty much to every section of the printer.

The printer has a black color which makes you identify it even from afar end.

The video starts by introducing you to the power button which is present on the bottom left of the body of this printer.

Inside the door is the print chamber, which can be opened and closed for collecting parts, functional prototypes, or post-processing.

There are three steps that the company claims you should go through for printing a part or functional prototype using water-soluble support, they are, you need to take the model off the build tray and submerge it in water which is present inside the Zortrax DSS Station.

The second step is to take the model out of the Zortrax DSS Station.

Here the company is honest enough to admit, how sometimes it’s necessary to remove remnants of support with a brush included in the kit.

And finally, the third step involves careful drying once the support has dissolved.

The box of the printer comes with a 3D printer, Z-PETG, Z-SUPPORT Premium, 5 build trays, Starter Kit, and 2x Spool holders, for alternating use of single and dual extruders.

Being a desktop 3D printer, it must come completely assembled and all you would be needed to do is, the bed leveling which you are required to check before starting to print your first part on the printer.

Also suggested is the reading of the instruction manual and going through documents that are available on the printer’s website for knowing the functionality of parts of the printer.

There are videos available on the same webpage which is dedicated to the printer, which if you watch, would help you know the printer more.

The company claims its printer to work on a technology named LPD Plus, the full form of which is Layer Plastic Deposition Plus.

Arguably this is another name given to FFF or FDM 3D printing technology.

Because the mechanism of this printer suggests it work similarly to FFF or FDM 3D printing.

The nozzle system is attached to the extruders on one end and the rails on the other.

Rails are supported by the pillars which make sure the nozzle system is able to move up and down i.e. closer and away from the print bed after a layer of filament is printed on it.

Because the complete system looks like FDM 3D printing technology we are assuming that the cost of printing a part or functional prototype using this printer would be lower than other technologies.

Although when talking about the printing cost, a lot depends on the infill of the part that you are printing as well as the electricity consumption of the printer, etc. 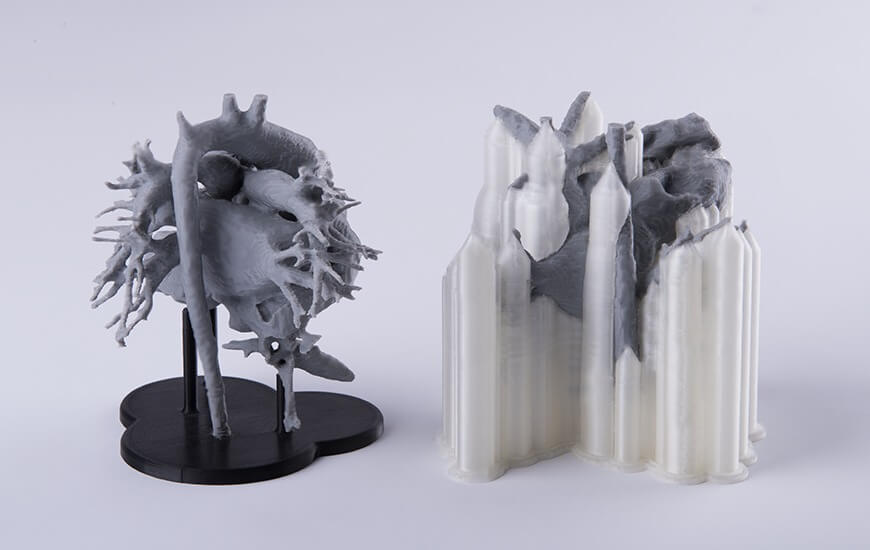 There are pictures of:

All of them look to possess more than average level of print quality than parts that are generally printed with FDM 3D printing technology have. 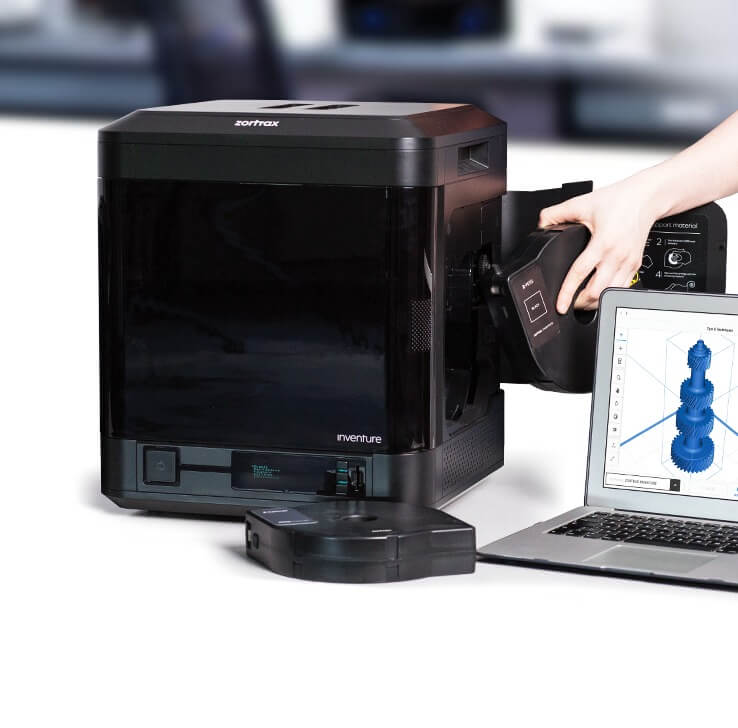 Z-Suite is the name of the software that comes with the printer.

It supports file inputs with an extension .STL, .OBJ, . DXF, and .3MF. Mac operating system up to the Mojave extension and Windows 7 and more advanced versions are supported with the software.

The points that we want you to not miss out on are mentioned in the brief below. So catch some time to have a glance at, before making your buying decision.

3D Printer cost: To judge whether this printer is affordable or not all you have to do is compare the list of features mentioned in this printer’s in-depth review with another printer in the same price range.

3D Print quality: Seeing the pictures of parts or functional prototypes that are printed using this printer, the print quality is extraordinary.

3D Printer capability: Not only can you print with external 3D printing materials or third-party filaments, but also the company offers you some dedicated filaments which they feel are capable of getting printed on the single as well as dual extrusion modes.

3D Printer Practicality: The parts that are shown printed by the printer on its webpage range from the automotive industry to medicare, so you can judge the practicality of the printer based on that.

3D Printer User expectations: This printer does not have a specific set of user expectations that it will fulfill. Instead, it has a little for everyone. For the beginners, it is affordable, for the experienced users it gives the quality of the print, for the teachers, it has small build volume which they can teach their students easily by keeping the printer on their desk.

So, if there is a printer, which you wish to buy, look whether the Zortrax Inventure falls into the price range which you are aiming for.

Apart from that look at the print quality and see whether you can compromise a little budget for the quality.

But most importantly look at the build volume see whether you are fine with it.

Because you can get more by spending the same. So, it’s just the give and takes!

3D Printing Raft - Learn How to 3D Print With?