Tractus3D T850 was born from a passion for perfection and it is able to stand on the single-minded aim i.e. being the most advanced and yet affordable 3D printer in the world.

Boasting a high print speed of 300 millimeters per second, Tractus 3D T850 is able to deliver an accuracy of 10 microns. It is a midrange FFF delta ...
Add to wishlistAdded to wishlistRemoved from wishlist 0
Add to compare
Check Price
Tractus3D

This 3D printer is the second one in the list of Tractus, the Dutch-based 3D printer manufacturer’s DESK series. Being an FDM 3D printer, its primary aim is to simplify the complete process of 3D printing.

Although being a desktop 3D printer, its printing speed and accuracy is similar to smaller industrial 3D printers.

With a height of 114 centimeters, Tractus 3D T850 manages to fit your desk completely.

Because you can 3D print up to 360 mm in height and 280 mm in diameter, it can be said large enough for quick prototyping as well as great design.

Automatic bed leveling: This feature helps you get the first layer of every part or functional prototype you plan to print with this printer with accuracy. Once that is assured, there are very few chances of any sort of failure in the print. The feature also means that there’d be lesser human intervention and hence, higher efficiency in the complete 3D printing process.

Heated build plate: Having a heated build plate in Tractus 3D T850 means that your overall print time would decrease. You would get a head start in 3D printing any part or functional prototype you wish to print. The build plate of this 3D printer is made up of PEI, which also helps in bed adhesion.

Printing with multiple nozzles to achieve a wide range of layer resolution: Tractus 3D T850 is one of those rare 3D printers which allow you to juggle up with various diameters of nozzles. This is helpful for building parts and functional prototypes having intricacies in 3D design, with dimensional accuracy. 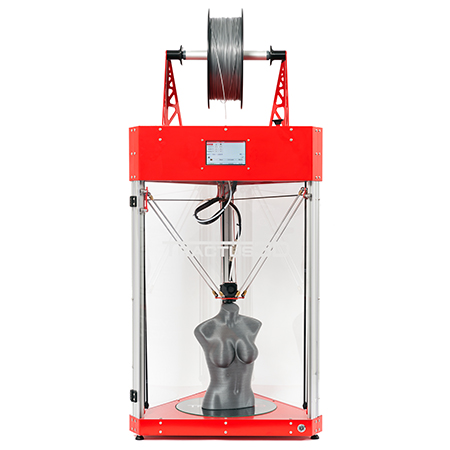 T850 has a building width of 280 mm and a building height of 340 mm. You can print parts and functional prototypes with a print speed of 300 millimeters per second on it.

This 3D printer is based on Fused Filament Fabrication or Fused Deposition Modeling 3D printing technology.

There are five different nozzle diameters that you can print on this 3D printer with. All of the five of them offer different resolution ranges.

The operating sound of this printer ranges around 40 decibels. It can be connected using the Local Area Network.

There is a five-inch long touch screen display present on the body of T850 which supports Dutch, French, and German apart from English.

The build plate of this printer is made with PEI sheets and can resist temperatures ranging from 10 to 120 degrees Celsius.

You can level the bed of this printer automatically. All the nozzles can withstand temperatures up to 300 degrees Celsius. The print speed of Tractus 3D T850 is 15 cubic millimeters per second.

This 3D printer supports printing with filaments such as PLA, PRO1, PET-G, ABS, ASA, Facilan C8, TPU/TPE, Nylon, PC, and Fillers like wood fill. The filament diameter should be 1.75 mm.

You can monitor the printer using a web interface. The nozzle of this printer takes less than 90 seconds to get heated up. 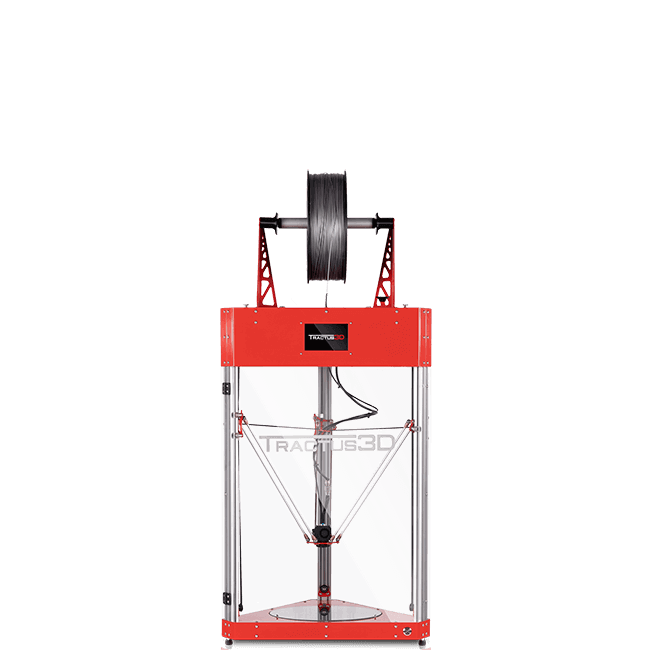 The printer looks like a beast ready for 3D print anytime. An open filament spool holder on its head gives it such an aggressive look.

Otherwise, Tractus 3D T850 has the standard Delta construction like all other 3D printers manufactured by Tractus.

Three stands stay tall and connected in the form of a triangle. They have rails over them which allow for smooth movement of the complete nozzle system according to the mentioned geometry of the part or functional prototype, near the print bed.

Tractus 3D T850 comes with a cap that can be attached over the filament spool holder whenever needed.

Overall, the printer manages to look something more heightened than normal desktop 3D printers. But that is the case, in general with all the 3D printers constructed using Delta style.

The printer comes completely assembled when it reaches your place. All you are suggested to do is go through the manual that comes with this printer. This will help you know the functionality of parts that are present inside the printer.

You would get to know the specificities of the print chamber, the nozzle system, the extruder, the rails, and the body of this printer.

By knowing so, you can get familiar and then by working with the printer you can particularly decide what favors the printer and what does not.

Apart from this, you should also get familiar with the touchscreen interface that comes along with it.

As mentioned in the specification region, it is multilingual and lets you control and manage various aspects of the printer with a gentle tap.

Moreover, the printer has an automatic bed leveling feature that enables you to adjust the nozzle height from the print bed via a simple touch.

The process of 3D printing an object via FDM or FFF 3D printing technology is simple. You start with a solid filament spool, the place for fitting which, is given on the head of Tractus 3D T850.

This filament spool will be of the 3D printing material with which you wish to 3D print a part or functional prototype.

This 3D printing material needs to be heated till the temperature is equivalent to its glass transition temperature.

Once that is achieved, the solid material is ready to melt and is passed via a nozzle to the print bed of the printer.

The laying down of this then liquid material happens according to the geometry of the part or functional prototype conveyed to the 3D printer with its sliced file.

After the first layer of the part or functional prototype is printed, the nozzle system moves upward equivalently to the layer height offered by that printer, and the second layer is printed.

And the same process keeps on happening until the complete part or functional prototype is 3D printed. 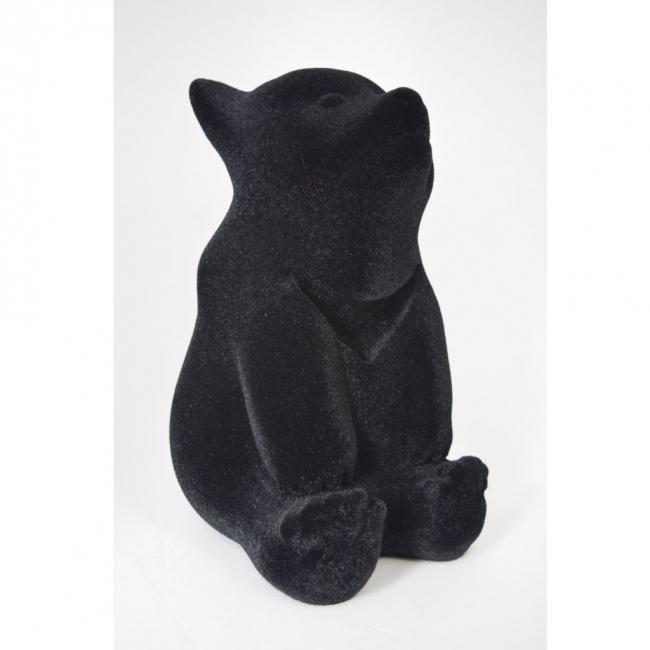 The X, Y as well as Z-axis resolution offered by this printer is 10 microns each. Such a resolution allows the parts and functional prototypes manufactured by the printer as well as the printer itself to be used in industries such as Signage and Retail, Education, Automotive, and manufacturing.

Something unique about Tractus 3D T850’s part and functional prototype’s quality is the ability to print in various ranges of resolutions.

Depending on the nozzle diameter that you use, you can print part or functional prototype ranging from 10 microns to 800 microns.

The printer comes equipped with one license of Simplify 3D slicing software that can be used on two computers.

It supports Windows, Linux as well as Mac operating system and file types such as STL, OBJ, 3MF, JPG, and PNG. The printable formats using this slicing software are G and GCODE.

For Tractus 3D T850 you get a warranty period of twelve months on all the parts and functional prototypes.

Tractus’ technical support team or certified service partners or resellers would help you clear all the doubts regarding any printer that you have bought from this company.

With that, you get free cleaning of print heads, a discount on filaments, and a fifty percent discount on new upgrades.

Tractus 3D T850’s cost, print quality, speed, capability, practicality, and user expectations are the six most important parameters mentioned in brief below, before concluding this article.

3D Printer Cost:  Overall, seeing the features that this 3D printer is able to offer and the print quality of parts and functional prototypes printed using this 3D printer, the cost is justified or even lesser than other 3D printers who do not offer the facility to print such big build volumes.

3D Printer Quality:  The print quality of parts and functional prototypes created using Tractus 3D T850 is average like those of other FDM 3D printers in the same price range.

3D Print Speed: 15 cubic millimeters per second is the print speed offered by this 3D printer which is pretty standard taking into consideration the quality it offers. Tractus 3D T850 prints are faster than Cartesian 3D printers in the same price range.

3D Printer Practicality: In terms of the size the 3D printer has, it can fit into any room or office environment. Also, in terms of the noise it makes, it’s pretty quiet. One thing worth noting is the huge build volume offered by this 3D printer, though being a desktop 3D printer. You can make a part or functional prototypes in one-go. No need of assembling it after making it in parts.

3D Printer User Expectations: Tractus 3D T850 is not just for one class of audience. If you are intermediate and can afford to have such a huge budget, it can suit your long-term vision in the 3D printing industry. In case you are an intermediate or professional, it can let you play with various materials and layer resolutions. So, the printer is pretty much able to satisfy everyone’s expectations.

Tractus 3D T850 was born from a passion for perfection and it is able to stand on the single-minded aim i.e. being the most advanced and yet affordable 3D printer in the world.

How Much Does 3D Printing Cost Per Hour - Expert Guide