This printer was built to strengthen the company’s range of machines meant for fulfilling the strong demand for serial production. It will allow you twenty-four-hour 3D printing with various materials.

Delta WASP 2040 Industrial X is the third and latest industrial 3D printer made by Delta.

The printer features a sliding heated built plate, Vaccum System, and heated chamber with a dynamic door opening. WASP is a system that is known in the market for solving typical problems that occurred in 3D printing technology.

This 3D printer is extremely famous for using a belt that allows smoother movement for a very long duration of time.

Apart from the belt, dual gear filament driver, auto-calibration system, continuous print mode, etc are some of the benefits of buying this printer.

Without further ado, let’s dive into an in-depth review of the Delta WASP 2040 3D printer, designed for industrial use.

The former is used while printing with single as well as multi-materials, whereas the latter is used for 3D printing flexible materials that have a shore hardness of 50 A.

The printer’s external Bowden is a replacement for the suspended one because of the printer manufacturer’s new introduction i.e. Filament driver X. It has doubled the grip on filaments and tripled the force because of two hardened steel gears and a gearbox.

The golden rule of modern manufacturing is, the lower the human intervention, the higher a machine’s efficiency.

By decreasing your manual labor, the printer’s auto-calibration system will take care of its efficiency. It will let you focus on other important aspects of a 3D printing project such as designing.

Because you will not have to measure the height of the nozzle from the print bed according to the geometry of the part that you wish to 3D print! Instead, WASP 2040 Industrial X’s auto-calibration system will do all that for you.

This will help you deal with the problem of clogging that is very common when you have FDM 3D printing filaments.

Dual Gear Filament Driver exerts better pressure ensuring that WASP 2040 Industrial X’s nozzle does not clog and there is a smooth flowing of liquid filament from it to the printer.

Moreover, having this in your 3D printer will keep the entire system of stepper motors, extruders, nozzle, and belts, intact.

The sensor system attached near the filament spool will detect the amount of filament at various times. And you will get to know the amount on your user interface.

This would make sure that before the filament is about to end, you already know about it. And have a replacement.

Similarly, if you are starting a 3D printing process, you already check if there is a need for a refill of filaments to ensure that you do not need to pause the process for changing them.

WASP 2040 Industrial X comes with an inbuilt, onboard camera. So you can watch the live 3D printing process.

This is extremely beneficial when you are 3D printing small parts or functional prototypes that have intricate designs.

It will let you print accurate parts on the first go. Because your flaws would be visible to you in a much more sophisticated manner and you would not need to guess what went wrong merely by looking at the design.

It also gives you the ability to pause the printing, in case things are going the wrong way.

The printer is equipped with two internal heat sources, thanks to the efficient way of heating.

While working with this 3D printer it will be possible for you to make sure the working temperature stays around 80 degrees Celsius.

And the other parts of this printer would get no excess burden. This will in-turn prolong the life of parts and hence this 3D printer as a whole.

The innovative air cooling system of this printer permits you to keep the temperatures below the threshold limit of cladding materials used inside the printer.

Video Tutorial on board

For guaranteeing you an easy setup of this printer, the printer manufacturer has installed a video tutorial. This would take you through step by step procedure that you need to follow before starting to 3D print your first part of a functional prototype. It’s extremely handy for all those who do not have the experience of working with a 3D printer before. Also, it’s printer-specific, so even if you have previous experience with 3D printers, the content would show you all you need to do before starting to 3D print on WASP 2040 Industrial X.

Delta WASP 2040 Industrial X can be integrated into the Wi-Fi network, allowing you to monitor and control this 3D printer from devices such as your smartphone, tablet, or PC.

As mentioned above, there is also an in-built, on-board camera. So, say after starting your 3D printing process, if you wish to go away from the place where this printer is kept, you can still monitor the process using your smartphone or tablet.

Delta WASP 2040 Industrial X is a 3D printer with an enclosed print chamber. So, the printer manufacturer has kept the facility to notify you about the opening of the door during the 3D printing process.

Whenever such a thing would happen, it will pause the 3D printing process and notify you.

This is an evolution of the Stop and Save function that was and still is popular among the mainstream 3D printers. Using this system the extruding data will be backed up in the SD card.

From the same data, the printing process will start whenever the printer will be turned on.

This system perfectly fits printers made by Delta Company because of the Delta setscrew on the top.

All the files saved in the form of data will be available to you with the file name resurrection.g.

This is a recovery system of the above mentioned saved file. In case while dealing with the printer, the printing had been interrupted which made it impossible for you to use resurrection.g, it will allow you to start print a file from a precise height of the model to be printed, using the previously selected height. 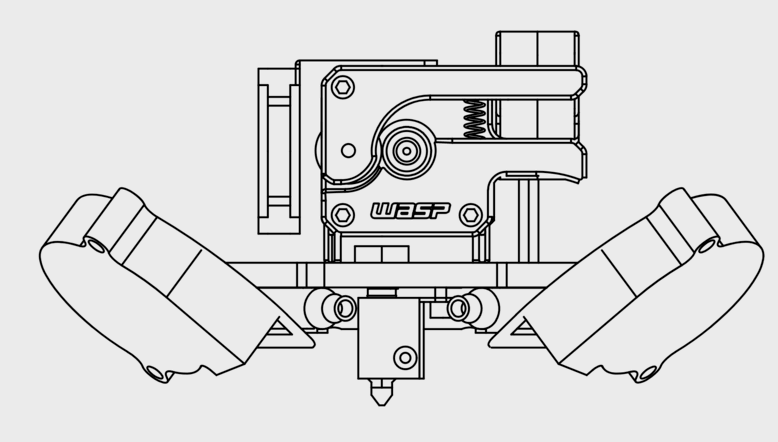 The minimum layer height of parts and functional prototypes that can be manufactured using this 3D printer is 50 microns. You can print at max with the speed of 300 millimeters per second.

The travel speed of this printer’s print head is 500 millimeters per second. The maximum temperature that this printer’s bed can withstand is 120 degrees Celsius.

The extruder inside this 3D printer is the WASP Zen X with an MT cartridge and 0.4mm nozzle diameter. 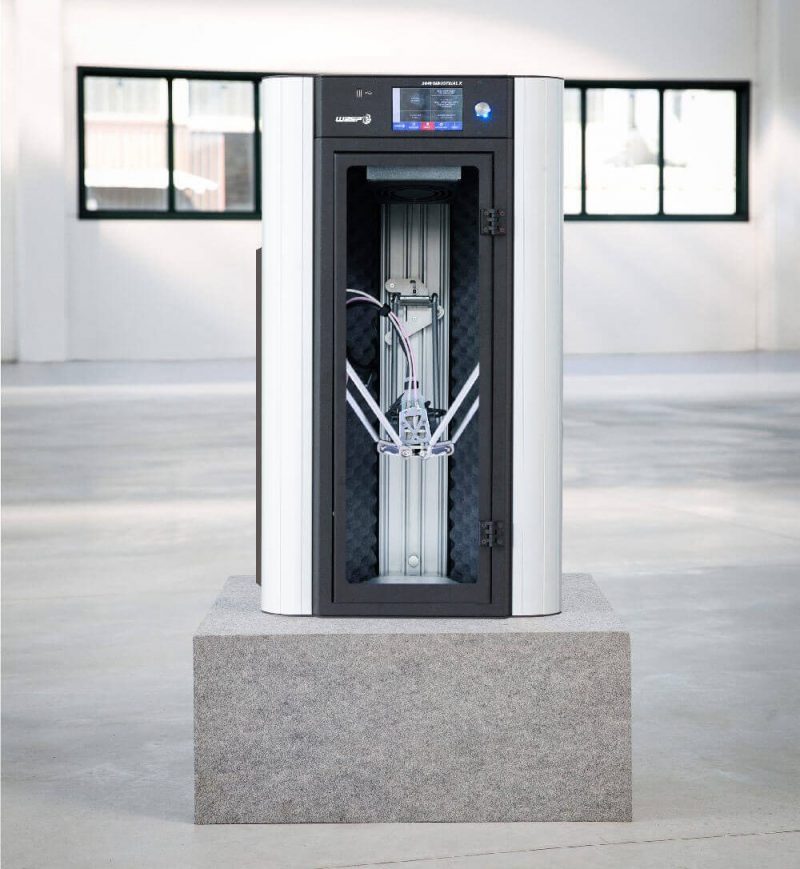 The frame and the cover of this printer are made from Aluminum, Steel, polycarbonate, and PU. All of these metal body make up for a stiff and vibration free precise machine.

The bed of this 3D printer is made from machined Aluminum. The movement of this printer is possible using wheels made from Nylon wheels on anodized Aluminum sliders PU steel core belts, resistant to high temperature.

Polymer foam is used for thermo-electric insulation which ensures there isn’t much heat transfer into the surroundings.

At the head of this 3D printer, you find a very interactive user interface. If kept on a desk, this printer will catch your eyes.

Since the printer manufacturer has installed automatic systems, you would not have to take too much time in setting up.

It comes completely assembled. All you are advised is; to go through the video tutorial. That tutorial will let you through the process of setup. 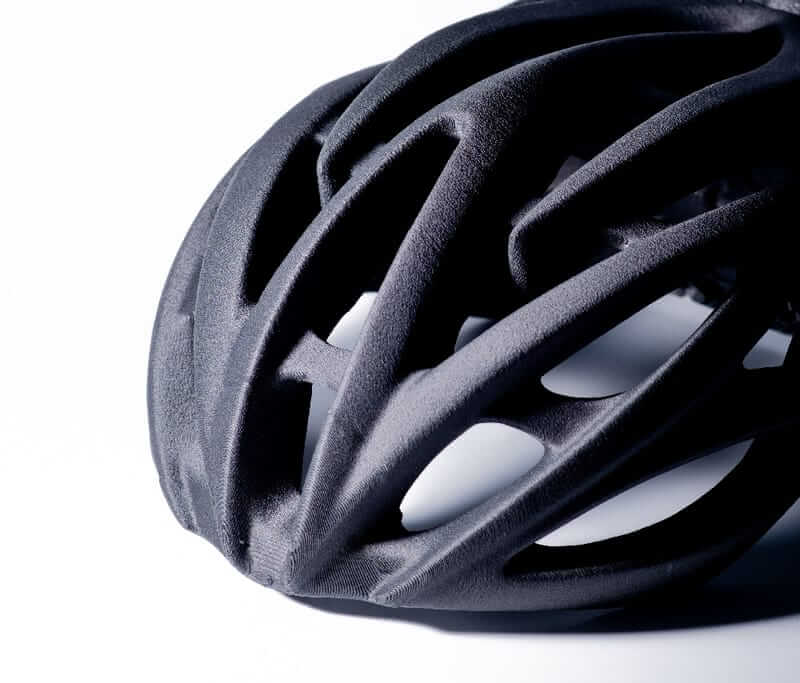 The printer is based on FDM 3D printing technology. You will have to get the nozzle from the above-mentioned list with which you wish to 3D print parts and functional prototype.

The 3D printing material will have to reach its glass transition temperature in the extruder. Once it does reach so, it can start to melt at the print bed.

If you were to calculate the printing cost of this printer you will have to take into account, the material cost which depends on the geometry of your part or functional prototype that you are willing to manufacture.

Apart from the material cost, you will also have to know the percentage of infill, the layer height, and a lot of other factors. 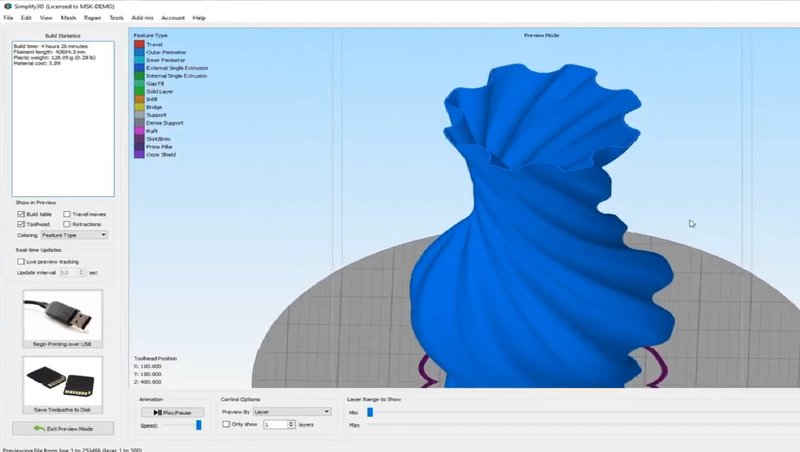 This 3D printer is compatible with all slicing software available online.

Delta printers have an excellent support team that will provide you Technical Assistance, answers to your FAQs, Material Guide as well as files to Download.

For reaching out to the telephonic support team of the company, you will have to fill the support form. General contact can be made with the team of this printer manufacturer using email as well as Skype.

Summarizing the complete article in various factors below.

3D Printer Cost: It is an industrial-level 3D printer so obviously the cost of this printer has to be high.

3D Printer Practicality:  It has a fantastic design, easy to print, high-quality parts, and functional prototypes of huge build volume.

3D Printer User Expectations: This printer is primarily meant to satisfy the expectations of manufacturers and professional 3D designers.

Overall, the printer is a go-to printer for all those who like to print with the easiest 3D printing technology i.e., FDM.

Although FDM 3D printers are not known to offer as high layer resolution as SLA or other 3D printing techniques, this 3D printer does well enough to produce high-quality surface finishes in parts and functional prototypes that it manufactures.

A core benefit of this printer is its high print speed, 300 millimeters per second is a print speed you don’t get easily in a printer at this price. Additionally, the printer offers you the freedom to print with fifteen different 3D printing materials.

It is easy to set up and has amazing features. So, if you are thinking of a long-term future in the field of 3D printing, consider buying this 3D printer.