T1250 is one of those 3D printers, the affordability of which will completely astonish you. It is capable of offering the most amounts of layer resolutions that other 3D printers in the same price range would hardly be able to.

Hosting an Aluminum and polycarbonate frame, Tractus 3D T1250 is light in weight, yet robust. The machine’s heated print bed can reach up to a ...
Add to wishlistAdded to wishlistRemoved from wishlist 0
Add to compare
Check Price
Tractus3D

This 3D printer offers the largest build volume in Tractus’ DESK series. Having the perfect size to fit your desktop T1250 has some of the most attractive specifications, print speed, quality, features, and a lot more to make up for the price it is available at, in the market.

T1250 has a building height of 154 cm, 600 mm height, and 350 mm in diameter. Overall, it makes up for a good 3D printer that can make great designs and prototypes right on your desk.

Heated build platform: T1250 has a heated build platform that reduces the risk of error while printing the first layers of any part of a functional prototype. It also helps improve the adhesion of the first layers that are laid down on it. Also, the temperature that this platform can withstand is around 100 degrees Celsius which means you can print with most of the 3D printing filaments.

Auto bed leveling: One of the main points of accuracy check of any part or functional prototype printed using 3D printing is its first layer matching with the 3D design file. And the accuracy of this completely depends on how good the print bed of that printer was leveled. By enabling auto bed leveling, Tractus has given you an easy option to increase your efficiency by lessening human intervention and efforts.

Tractus 3D T1250 offers X, Y, and Z-axis resolution of 10, 10, 10 microns each. The maximum print speed that you can 3D print a part or functional prototype using this 3D printer is 300 millimeters per second.

The different range of layer resolutions offered by different types of nozzle diameters is as follows.

There is a seven-inch long touchscreen present on the body of the printer which supports Dutch, French, and German languages apart from English.

You can automatically level the print bed of this printer. Coming back to the build plate heat time, it takes lesser than four minutes to go from 20 degrees Celsius to 60 degrees Celsius.

The nozzle can resist temperatures up to 300 degrees Celsius. It gets heated up in lesser than ninety seconds. 15 cubic millimeters per second is the maximum extrusion volume that the print head is able to extrude.

A quote for the price of Tractus 3D T1250 is available online. For availing of the quote, you need to fill a form that asks for your details, your company’s details.

And when you submit this form, the company will get back to you at your email address quoting the price of this printer. 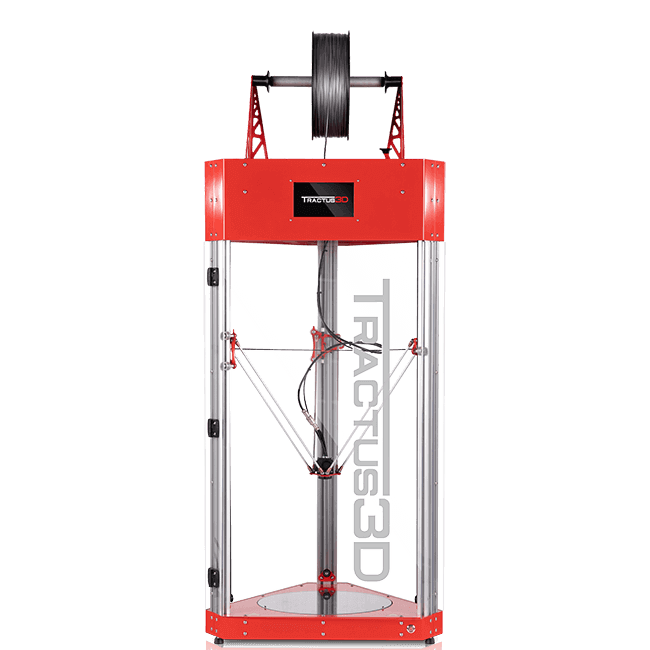 The printer looks very much similar to Tractus 3D T850. The only difference you will find is in the build volume, to be specific in terms of the building height.

It is larger than T850 and hence the largest offering that Tractus has to offer in terms of desktop 3D printers.

The construction of this 3D printer is like all other 3D printers made by Tractus which is, Delta.

There are three stands arranged and connected forming a triangular fashion. Each of them has rails over it.

These rails allow for an up-down movement of the nozzle system after one layer of the part or functional prototype is 3D printed.

There is also a difference in the length of the touchscreen interface between T1250 and T850. The latter has a five-inch long user interface whereas the former has seven inches long.

The placement of the filament spool holder is typically over the head of the printer.

Overall, it has a stable look which is not highly attractive but giving you the sense of how stable it will stay during the course of 3D printing a part or functional prototype.

Tractus 3D T1250 will come completely assembled. But all of you who haven’t got a hand on 3D printing before this 3D printer are advised to go through the manual that comes along.

Doing so would let you get a hold of the parts that make up this 3D printer and its functionality.

As mentioned above, the bed leveling of T1250 is automatic so all you have to do before starting with your first print is to gently tap on your touch screen interface and the nozzle height would be adjusted with the print bed according to the geometry of the part or functional prototype you are willing to 3D print.

Once this is done, you are all good to go. Just spend some minutes interacting with the complete user interface so that you do not have to juggle up anywhere after starting the 3D printing procedure.

And in case you happen to find any hurdles, you can reach out to the reseller that you bought this from or the company directly.

Overall, it should not take you more than fifteen minutes to start with 3D printing your first part on Tractus 3D T1250.

As mentioned in the specifications section, the printer is based on FFF or FDM 3D printing technology.

For printing a part or functional prototype using this 3D printing technology, you need to have a filament spool of the materials you wish to 3D print.

As stated above, they are present in solid form, in the filament spool holder, like the one that is present on the head of T1250.

After that happens, the solid filament has melted and can pass through the nozzle and reach the print bed according to the geometry of the part or functional prototype that you are willing to 3D print.

After the first layer is laid down on the print bed, the nozzle system of Tractus 3D T1250 will move upwards, against the gravity for printing the other layer.

After each and every layer’s printing is completed, it is put out either in open or subjected to cooling, and then the part or functional prototype is application-ready. 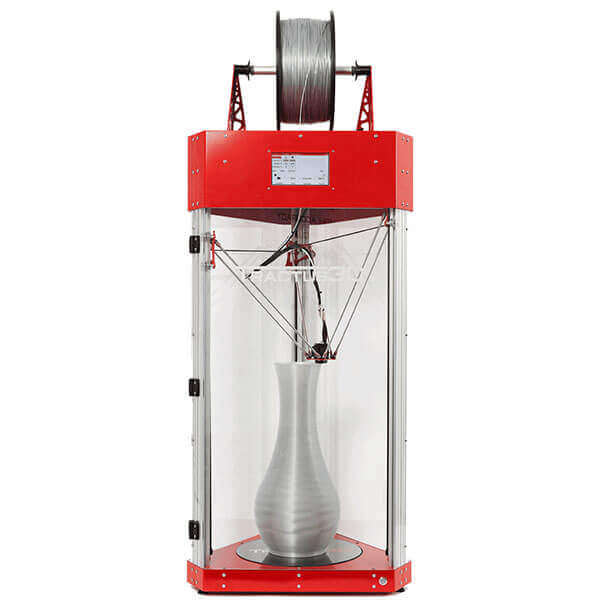 Tractus 3D T1250 offers 10 microns resolution in each and every axis of part or functional prototype printed on it.

Having stated so, different diameter nozzles are able to print parts and functional prototypes of different layer resolutions.

This quality of T1250 allows for the printing of intricate geometries even in objects that have a smaller geometry comparatively.

As per the claims made by Tractus 3D, T1250, because of its precision, accuracy and speed are used in four industries:

All the parts and functional prototypes manufactured on T1250 depict a good quality surface finish that is commendable for any FDM 3D printer to have. 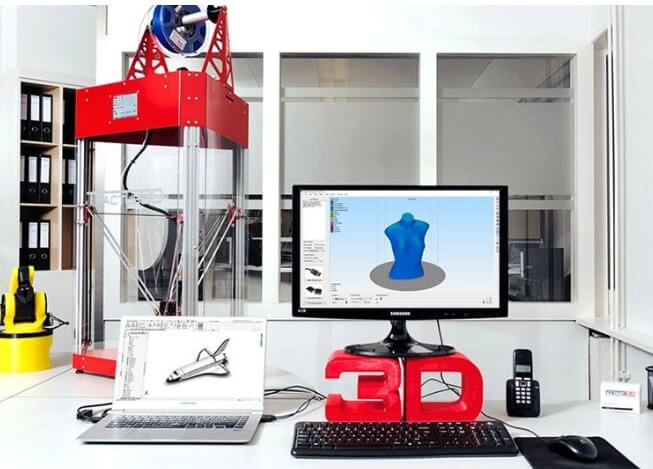 Tractus3D T1250 comes with one license of the slicing software named Simplify3D. This will allow you to operate the software from two different computers.

It supports all three operating systems i.e. Windows, Linux, and Mac. The file types that are compatible with this software are; STL, OBJ, 3MF, JPG, and PNG.

The printable formats on this software are G and GCODES.

Tractus offers a twelve months warranty period on all the hardware parts that come with this 3D printer.

With that, you get complete support from the Tractus 3D support team or certified service partners or resellers.

With this, you also get free cleaning of print heads, a discount on filaments, and a fifty percent discount on new upgrades.

For availing of the support, you need to fill a support form or check out the list of resellers and find out the closest one to your location.

You can also contact the printer manufacturer via phone or the online mentioned email id.

An attempt to summarize the complete article in the most important factors that will influence your buying decision is made below.

We have listed down T1250’s cost, quality, speed, capability, practicality, and user expectations in one-go.

3D Printer Cost: As mentioned earlier in the article, the price of this printer is not explicitly mentioned online. You will need to fill the form to get a quote from the company. But the printer manufacturer is known for manufacturing some of the most affordable Delta 3D printers that offer huge volume so you can have high stakes on this one as well.

3D Printer Quality: Being an FDM 3D printer, it is not able to provide surface finishes that of an SLA or other 3D printer. T1250 makes up for industry-standard quality provided by other FDM 3D printers in the same price range.

3D Print Speed: Printers that have Delta-type construction are known for extraordinary print speed and T1250 is no different. Every printing project using this 3D printer will be completed very fast.

3D Printer Capability: The printer manages to astonish you by offering printing with such a wide range of 3D printing materials. Not only that but also able to 3D print with different nozzle diameters and achieve different layer resolutions.

3D Printer Practicality: As per the claims made by Tractus, T1250 produces an operating sound of 40 decibels and consumes 510 Watts electricity. Also, the construction of this 3D printer is solid and does not vibrate while practically 3D printing a part or functional prototype.

3D Printer User Expectations: The printer cannot be typically labeled as a desktop 3D printer. Although being a part of the DESK series by Tractus, T1250 manages to outdo even as a 3D printer that’d be preferred by professionals in the field of 3D printing. Especially by offering huge build volume and extraordinary print speed.

T1250 is one of those 3D printers, the affordability of which will completely astonish you. It is capable of offering the most amounts of layer resolutions that other 3D printers in the same price range would hardly be able to. Also, you can print with a wide range of 3D printing materials using T1250. There is a lot that you avail yourself, after buying this 3D printer.